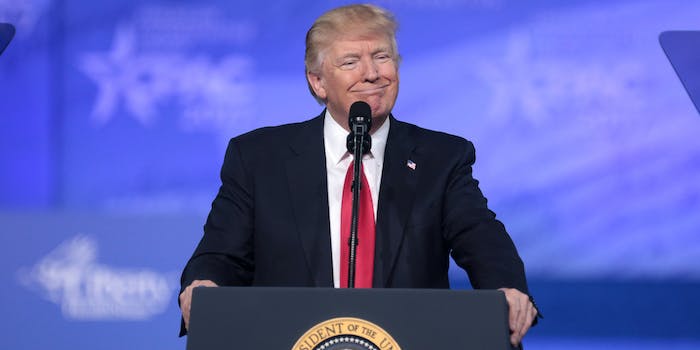 Trump is cheering—but he called these numbers a hoax.

The U.S. added 235,000 new jobs in February, according to the first full monthly jobs report under the Trump administration.

President Donald Trump during his 2016 campaign frequently cast doubt on the job numbers released by BLS, claiming they were “phony” and one of the biggest hoaxes in politics. Neither he nor anyone in his administration has voiced similar sentiments since taking office in January.

White House Press Secretary Sean Spicer praised the boost in jobs on Twitter, he but made no mention of flawed job numbers.

And Trump himself retweeted the Drudge Report’s celebration of the jobs numbers, which are slightly lower than the February 2016 jobs bump under Obama.

Pew noted that no major changes in the calculation of unemployment have happened since 1994.

Most of the new jobs added in last month were in construction, health care, manufacturing, mining, and private education, which economists say is due in some part to promised changes to the regulatory environment under Trump. This time last year, jobs in the manufacturing and mining industries were in a decline.

Many cast doubt on Trump’s promise to bring coal mining and manufacturing jobs back to the United States, arguing that companies will simply opt for cheaper labor or looser environmental regulations overseas. The U.S. coal industry has lost more than 30,000 jobs since 2009. Coal industry executives hailed Trump’s repeal of the Stream Protection Rule last month, but their claim that the move saved 77,000 jobs has been disputed.

BLS noted employment in the mining industry increased by 8,000 jobs in February, but roughly 6,000 of those jobs were in “support activities” for mining, which BLS notes are usually performed on a fee or contract basis. Regardless, the coal industry is cheering Trump’s anti-regulation stance.

“Trump has been successful in getting rid of regulation that would have hurt coal down the road,” Ted O’Brien, senior director of capital markets and marketing at XCoal Energy & Resources LLC, told Bloomberg in an interview this week at the CERAWeek conference.

O’Brien continued, however, that the Trump administration “hasn’t done anything that’s going to bring demand up to a point that you’re going to have an effort to bring coal jobs back into the U.S.”