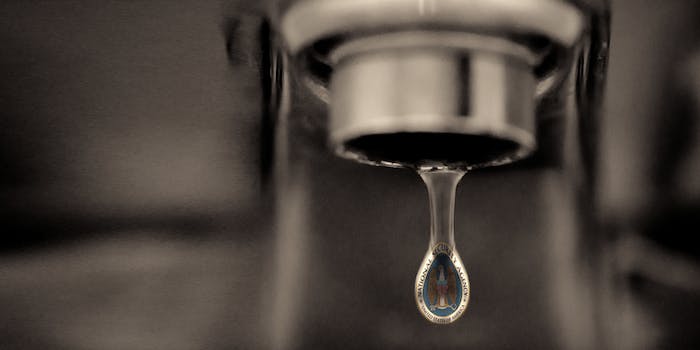 Someone call the plumber.

U.S. officials believe that a new source is leaking national security information to the public.

CNN reports that officials reached this conclusion based on new documents published today by Glenn Greenwald’s site The Intercept—documents which post-date National Security Agency (NSA) whistleblower Edward Snowden’s flight to Russia. CNN’s report confirms a theory has been floating around for at least a month.

The ‘second-Snowden’ theory originated in a July 3 BoingBoing post by Cory Doctorow, who reviewed a German report about NSA surveillance based on Web browsing habits. Doctorow discussed the report with “some of the technical experts who have worked on the full set of Snowden docs.” One of those experts, Doctorow wrote, “said that s/he believed that this leak may come from a second source, not Edward Snowden, as s/he had not seen this in the original Snowden docs.”

The same day, security expert Bruce Schneier weighed in and agreed with Doctorow’s conclusion, writing, “I do not believe that this came from the Snowden documents.”

Schneier added, “I think there’s a second leaker out there.”

Washington Post reporter Barton Gellman, who was one of the first journalists to file a story based on the Snowden documents, told a Post reader during a July 15 Q&A that he too believed that a new leaker had emerged.

“There have been stories published in Germany that are not attributed to Snowden, and that do not have the byline of any journalist who received documents from Snowden,” Gellman wrote. “I suspect they come from a different source, but I have no hard information to confirm that.”

On July 4, Greenwald himself tweeted that it “seems clear at this point” that someone was following in Snowden’s footsteps. Now, it appears, his site is receiving documents from this mysterious leaker.

Seems clear at this point RT @ageis @vruz Bruce Schneier: “I think there’s a second [NSA] leaker out there.” https://t.co/0iCULZWf0L