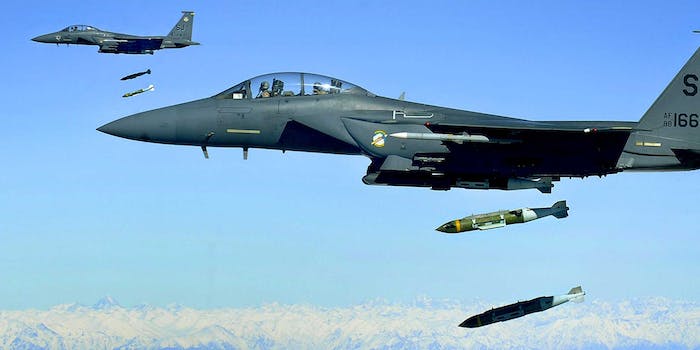 The U.S. Air Force found a hidden Islamic State command-and-control center after a militant posted a selfie of himself near the building on social media.

After the militant bragged online about the center’s capabilities, his photo provided enough information that the building was destroyed less than 24 hours later, Defense Tech reports.

Islamic State, also widely known as ISIS, Daesh, and ISIL, is famous for its use of social media as a propaganda and recruitment tool, especially for the way it’s able to reach into the West on our own social networks. This time, the brazenness backfired.

“The guys that were working down out of Hurlburt, they’re combing through social media and they see some moron standing at this command,” Air Force Gen. Hawk Carlisle, head of Air Combat Command, explained on Monday.

“And in some social media, open forum, bragging about the command and control capabilities for Daesh, ISIL. And these guys go: ‘We got an in.’ So they do some work; long story short, about 22 hours later through that very building, three [Joint Direct Attack Munitions] take that entire building out.”

The exact details of the identification were left out, but it’s not hard to make a few educated guesses.

All digital photos by default carry EXIF data that gives the exact location and timestamp of the picture. Smart operators will scrub that data off their photos, but it’s not a rarity to find it in the wild.

Even without EXIF data, however, experts can precisely geolocate photographs and videos by examining clues like buildings and other landmarks that show up.