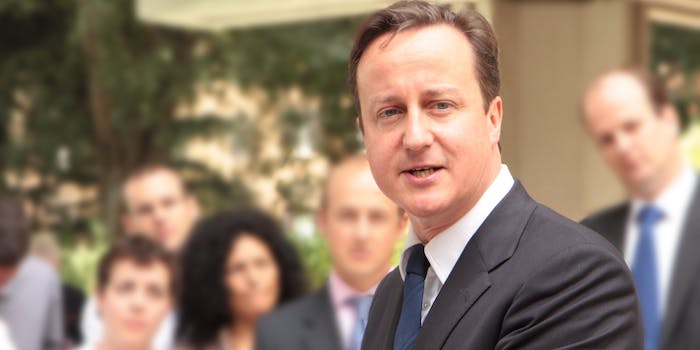 The U.K. government is expected to enact “emergency” legislation that will re-establish its ability to surveil citizens’ phone and Internet communications that the European Court of Justice struck down earlier this year.

At the moment, the government is able to access communication data, such as the time of a phone call and which number was called, but not the actual content of the call. The new emergency surveillance laws will reinforce the “legal intercept” capability to collect this data, as well as the ability to legally monitor phone conversations and Internet communications, like email.

In a press conference on Thursday, Prime Minister David Cameron said that the emergency legislation was just an attempt to retain the same level of access as before the European Court of Justice (ECJ) made its ruling.

Cameron said he was concerned that without this type of law in place, phone and Internet companies would delete their records. In the press conference, he referred to “pedophiles, terrorists and other serious criminals” who could put the country in danger if the current surveillance laws were not upheld.

As part of a three-party agreement to push this legislation through, the Liberal Democrats and opposition Labour Party requested that the bill also include measures to increase transparency and oversight when it comes to government surveillance. Among these new moves is the creation of a “Privacy and Civil Liberties Oversight Board” and a restriction on which public bodies (such as Royal Mail) are allowed access to government surveillance data.

The original ECJ ruling took place in April, and stated that phone companies and Internet service providers should not be forced to retain customer data. Some critics point out that it seems odd for the prime minister to portray this as “emergency” legislation that must be rushed through as quickly as possible since the ECJ ruling had already been public knowledge for several weeks.

Instead of going through the typical, months-long process for this type of legislation, the emergency surveillance laws will be pushed through in just seven days.

“The government was aware of this ECJ ruling six weeks ago and what they are doing is railroading this through,” Labour Member of Parliament Tom Watson told the Guardian. “No one in civil society has got a chance to be consulted.” Watson also posted an article on Medium, pointing out how strange it was for a piece of emergency legislation to be proposed without most members of parliament actually knowing what it was.

“If you look on Parliament’s website tonight,” he wrote, “you will not see the name, nor the text of the Bill to be considered. None of your elected backbench MPs have been told what Bill is to be debated. Imagine how outrageous it would be, if tomorrow, the government were to announce emergency legislation to an empty chamber.”

A representative from the Open Rights Group, an organization that champions digital privacy rights, said, “Not only will the proposed legislation infringe our right to privacy, it will also set a dangerous precedent where the government simply re-legislates every time it disagrees with a decision by the [ECJ}.”

In Thursday’s press conference, Cameron emphasised his opinion on the urgency of the situation, adding that “the time for debate on what more we might need to do … is in the future.”

The emergency surveillance laws have a “sunset clause” that requires them to be renewed every year instead of being a permanent law. Still, there are concerns that the U.K. may be moving towards more intrusive surveillance measures.

This is partly due to the looming spectre of the much-redrafted “snoopers charter,” controversial legislation that, had it passed last year, would have allowed the government a far greater breadth of access to private texts, Web browser history, phone records and other communications.