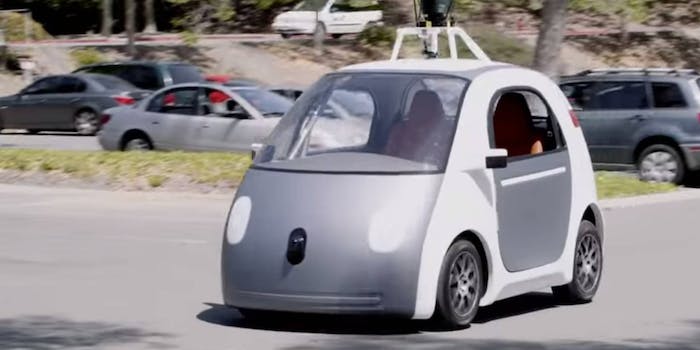 The British goverment is rewriting its laws in an attempt to pave the way for driverless cars.

The Highway Code is one of the world’s oldest road manuals still in use today. First published in 1931, when there were just 2.3 million cars on British roads, it was originally intended to regulate the chaotic convergence of motorists, pedestrians, cyclists and animals.

The handbook has been updated many times in its 83-year history to incorporate wing mirrors, mobility scooters for the disabled, and satellite navigation. But perhaps the biggest change has yet to be implemented—robots.

Science minister David Willetts says he has instructed the Department for Transport to add new regulations permitting the use of driverless vehicles, since the current code is “inadequate.”

As with its lobbying elsewhere, it’s Google that has driven the decision, although other futurists backed by government research grants and industry money (including weapons manufacturers) will also benefit from the testing of driverless cars on British highways.

The road to legalising autonomous vehicles has been relatively short for Google. While the driverless car was first envisaged at the 1939 New York World’s Fair, in Norman Bel Geddes’ “Futurama” exhibit, futurists in the Google X lab have been experimenting with the technology for just under a decade.

Led by engineer Sebastian Thrun, who was also behind Google Street View, the company announced it had been working on robotic vehicles in a 2010 blog post. But since no highway code, many of which are based on the 1931 British manual, mentions cars that drive themselves, the legal position was unclear, so Google was limited to testing the vehicle on its own property in Mountain View, California.

In 2011, with the help of a former legislator turned lobbyist, Google managed push through its own laws to licence driverless vehicles for testing in Nevada. The governor of California, Jerry Brown, followed suit in 2012, specifying the legal requirements for driverless cars in California at the company’s Silicon Valley HQ.

Since then, Florida and Michigan have followed suit with legislation regulating the vehicles for testing, while Google cars are also allowed to be tried on the streets of Spain, Germany and the Netherlands. It is expected that the California Department of Motor Vehicles will start  granting licences for more driverless car testers in September

Now the British government has jumped behind the wheel, offering to update the Highway Code to allow for robot drivers, which curiously weren’t mentioned in the 1931 manual or any of the subsequent editions.

But as well as helping Google, science minister David Willets said the current rules were preventing British engineers from giving their technology the same amount of road testing that Google benefits from in California. Engineers at the University of Oxford claim their Robot Car project, which augments driverless software to manual vehicles, is cheaper and may be as effective, although we won’t know until it’s allowed out of the testing lab and onto the roads. Robot Car is supported by grants from British weapons manufacturer BAE systems, Nissan, and the European Union.

“We need to work on these type of regulations so that as the technology develops in Oxford and elsewhere we can see them used,” Willets said.