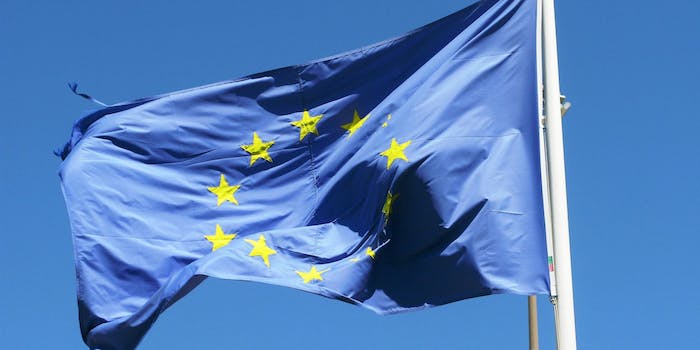 About 20 years ago in this country, there was a lot of talk about adopting a constitutional amendment that would have prohibited flag burning. Much debate was had on the topic. In fact, during every congressional term between 1995 and 2005, Congress routinely voted on such a provision, though it was never implemented.

But perhaps supporters of the amendment here in the U.S. could have taken a lesson from our friends over in Europe, where a recent YouTube video purports to show just how difficult it is to light a European Union flag on fire.

In the video, gaining attention on Reddit, a purported far-right extremist from the U.K. is seen delivering a hateful condemnation of the E.U. before attempting to light its flag on fire. Though try as he might, he’s just not able to get a blaze going. That’s because the flag is made from flame-retardant material—as legally mandated by the European Union for safety reasons.

This has been cause for much mockery over in the U.K. according to the Independent, which reports the man in the video is a member of the Bolton North West Infidels, a white-nationalist group analogous to the KKK.

In the video, the anonymous would-be flag burner delivers his anti-E.U. screed, declaring that “the European Union is corrupt to the core,” before attempting to ignite the flag with a lighter. The original video has since been taken down, but a comic remix has been posted in its place.

This video has already been viewed nearly 200,000 times and sparked plenty of parody. On Facebook, someone has already started a group for the public figure known only as the “Balaclava Flag Gimp.”