A government crackdown on social media isn't stopping Ugandans from getting online.

National unrest, charges of rigged-elections, and the arrest of the main opposition leader have led the Ugandan government to impose direct censorship on the country’s Internet service providers.

Long-time Ugandan President Yoweri Museveni implemented the censorship “due to a threat to Public Order & Safety,” according to a tweet from MTN Uganda, the country’s leading Internet service provider.

Museveni, who has ruled Uganda for 30 years, did almost exactly the same thing amid the 2011 elections and unrest.

“It starts to normalize use of our software once something like this happens. It’s a big step up.”

This time, the censorship is simply broader, which has citizens outraged.

“Why not stand up for our rights like $appl has done?” Ugandan systems engineer Ulysses Klaw asked MTN on social media.

Klaw was unfavorably comparing MTN’s actions to that of Apple, which is gaining international notoriety for standing up to U.S. government requests to help law enforcement access secured data on a terrorism suspect’s device.

MTN isn’t likely to stand up to the Ugandan regime, however, given their closeness with the ruling party. In the run-up to the current election, MTN shared 10 million subscribers’ personal data with the ruling National Resistance Movement (NRM).

Faced with obstructed access to the Internet and social media, residents and journalists have sprinted to anti-censorship tools like Psiphon and Tor, which mask users’ online activity, to step around the ban and continue to use the Internet unabated.

Virtual private networks are skyrocketing in popularity inside the country, with over 1.4 million mobile downloads on Android, according to the Mail & Guardian. Ugandans primarily access the Internet through mobile devices.

“Android basic smart phones are the main way of connecting to the Internet,” Moses Karanja, a Kenya-based researcher, told the Daily Dot. “Mobile penetration is around 70 percent and Internet at 40 percent. Mobile Internet subscription accounts for 97 percent of all Internet in Uganda.”

Psiphon, whose team says it’s seen about 25 times the amount of normal traffic from the country (around 7,000 connections) as of Thursday, is moving to welcome new Ugandan users as quickly as possible. 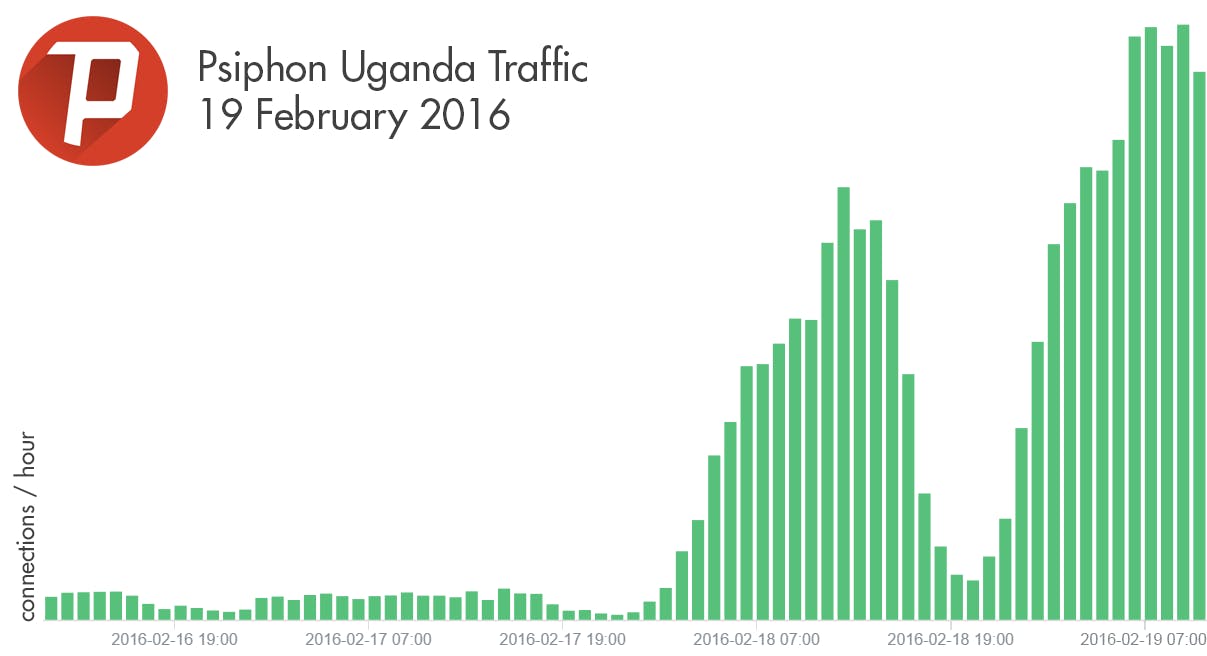 Psiphon has not done any outreach in Uganda, the company said, but word of mouth has led to the spread of anti-censorship technology around the country, a trend that’s notoriously tough for regimes to reverse once it’s begun.

“Once this starts happening, people don’t forget. If it happens again, they will jump onto our network,” said Karl Kathuria, CEO of Psiphon Inc. “Whatever growth we see now, I would expect it to go down once they unblock the services. But I wouldn’t expect it to go down to as low as it would have been before then. It starts to normalize use of our software once something like this happens. It’s a big step up.”

Just as necessity is the mother of invention, censorship is the great popularizer of circumvention technologies like Psiphon and Tor. The question is how fast and effectively it spreads and how the government reacts in the long term. 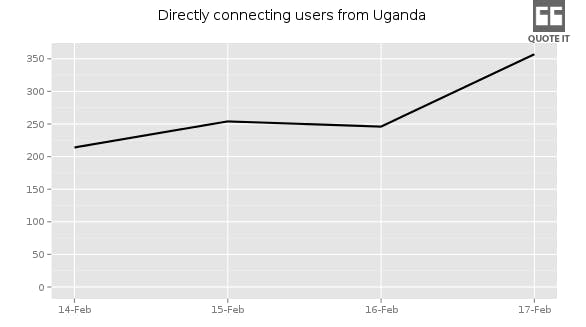 “What’s happened is that the government’s got it that social media can be used to organize, among other things, demonstrations,” Russell Southwood, CEO of the telecoms and Internet consultancy company Balancing Act, told the Daily Dot.

Facebook and Twitter have been used to organize opposition against Uganda’s ruling regime for at least half a decade, and the importance of social media in politics shows no sign of subsiding.

“Whatever result is announced, somebody will challenge it on the street,” Southwood said. “The way to get people on the street is social media. That is what governments fear, a movement from below that will challenge results that appear questionable.”

#UgandaDecides has crept up on Twitter despite the fact that the social network is banned in Uganda. The hashtag has become a platform for criticism and breaking news, including reports of power being shut off.

If I've learnt anything in #UgandaDecides, its that in the end we are alone as Ugandans. The world is just watching

Socialmedia was switched off, VPN kicked in
Now @UmemeLtd has decided to switch off power in my area nalya. Solar here we go#UgandaDecides

International attention is now turning to Uganda. The U.N. Human Rights Council is in contact with the country’s rulers over the election unrest, while the U.S. ambassador recently condemned the censorship.

As reports spread that President Museveni lost the election—full results are not expected until Saturday—security forces attacked crowds. U.S. Secretary of State John Kerry called on the forces to exercise restraint.

Kerry also spoke to President Museveni and urged an end to Internet censorship, as well as expressing “his concern about the detentions of opposition candidate Kizza Besigye and harassment of opposition party members during voting and tallying,” according to the U.S. State Department.

Elections are hot spots of Internet censorship around the globe.

“We see an increase in use at election times in lots of countries,” Kathuria explained.

In Africa, countries including Mozambique, Ethiopia, and the Democratic Republic of the Congo have blazed a trail of cyberspace censorship surrounding elections and unrest.

Given the region’s high rate of authoritarian rule, it comes as no surprise that anti-censorship software is becoming increasingly popular in Africa, according to Kathuria.

“This will become an issue that is increasingly in focus across the next five years,” Southwood said. “Social media has had a considerable impact in all sorts of different ways, and the fact that government is banning social media at crucial moments demonstrates the power of social media.”

Right now, an upcoming Iranian election is inspiring a wave of government censorship and digital resistance in a country famous for both.