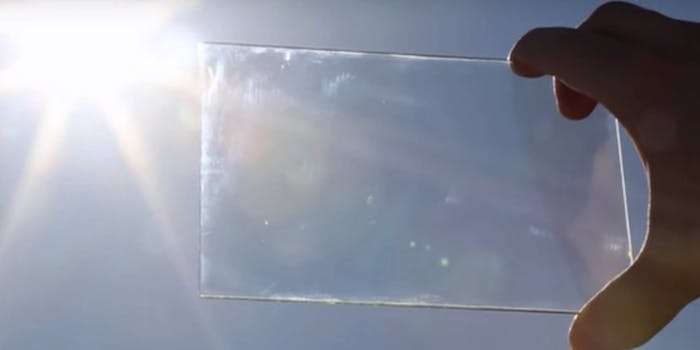 In the future, we might turn everything into a solar panel

Ubiquitous Energy is changing the nature of what we think can be used to collect energy from the sun.

The sun delivers more energy to our planet in an hour than the human race uses in a year, and we may soon harvest it as easily as we paint a house.

Ubiquitous Energy, a Massachusetts-based solar technology startup, has developed an experimental transparent photovoltaic material that can be applied to surfaces in order to collect solar energy. The see-through substance could hypothetically be applied to windows, smartphone screens, and all order of surfaces that see sunlight, turning them into instant solar panels.

The biggest problem facing solar technologies today is one of efficiency. Conventional solar panels that you might see on someone’s roof are, at best, turning 20 percent of the sunlight they capture into electrical energy. Ubiquitous Energy’s solution aims to attack this problem by changing what we think of as being a solar-gathering surface. Solar efficiency is still not where it ought to be, so for now we might fight it with a function of quantity—make everything into a power source.

If successfully developed to the point of commercial deployment, this technology could change a lot about how we think about our energy consumption, but solar energy consultant and industry veteran Rod Bergen is skeptical. “In my period of time, I’ve seen tons of things come and go, and a lot don’t have merit,” he told the Daily Dot over the phone. “The idea of coating a window to be solar is like a wet dream. It seems like a neat idea, but how will it extract electron flow, and how will I get it off the window?”

Ubiquitous Energy did not return request for comment, and co-founder and CTO Miles Barr did not return two phone calls. “It’s a great idea if it works,” Bergen continued. “Sell it to Grandma, sell it to GM. They can put it on the windows of their car and run the radio off the windows.”