The new taxi service comes as London's taxi drivers plan to block the city's streets in protest at the app.

On the morning thousands of furious taxi drivers plan to gridlock London in protest at Uber, the booking app has offered London’s black cab drivers the chance to join its network.

UberTAXI, the company’s latest venture, was announced on the company’s blog with a photo of a black cab sporting the company’s logo, calling for London to welcome Uber into its cherished black cab culture. This new service will join uberX, EXEC and LUX as another new transportation method for London.

Uber users will now be able to request one of London’s iconic black cabs picks them up, and the journey will follow the same fare rates that non-Uber taxis in London already follow. 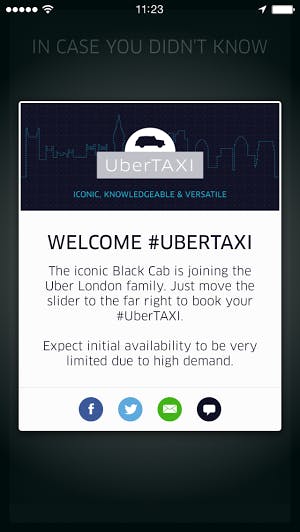 The announcement comes on the same day that London taxi drivers are planning to stage a protest in London by parking their cars on busy roads to bring the city’s traffic to a stop. Uber has previously used protesting taxi drivers as the perfect platform for announcements, responding to a San Francisco protest in 2011 by halving fares for that day.

When asked if it would consider joining the UberTAXI network, London cab firm Sherbet responded angrily on Twitter: