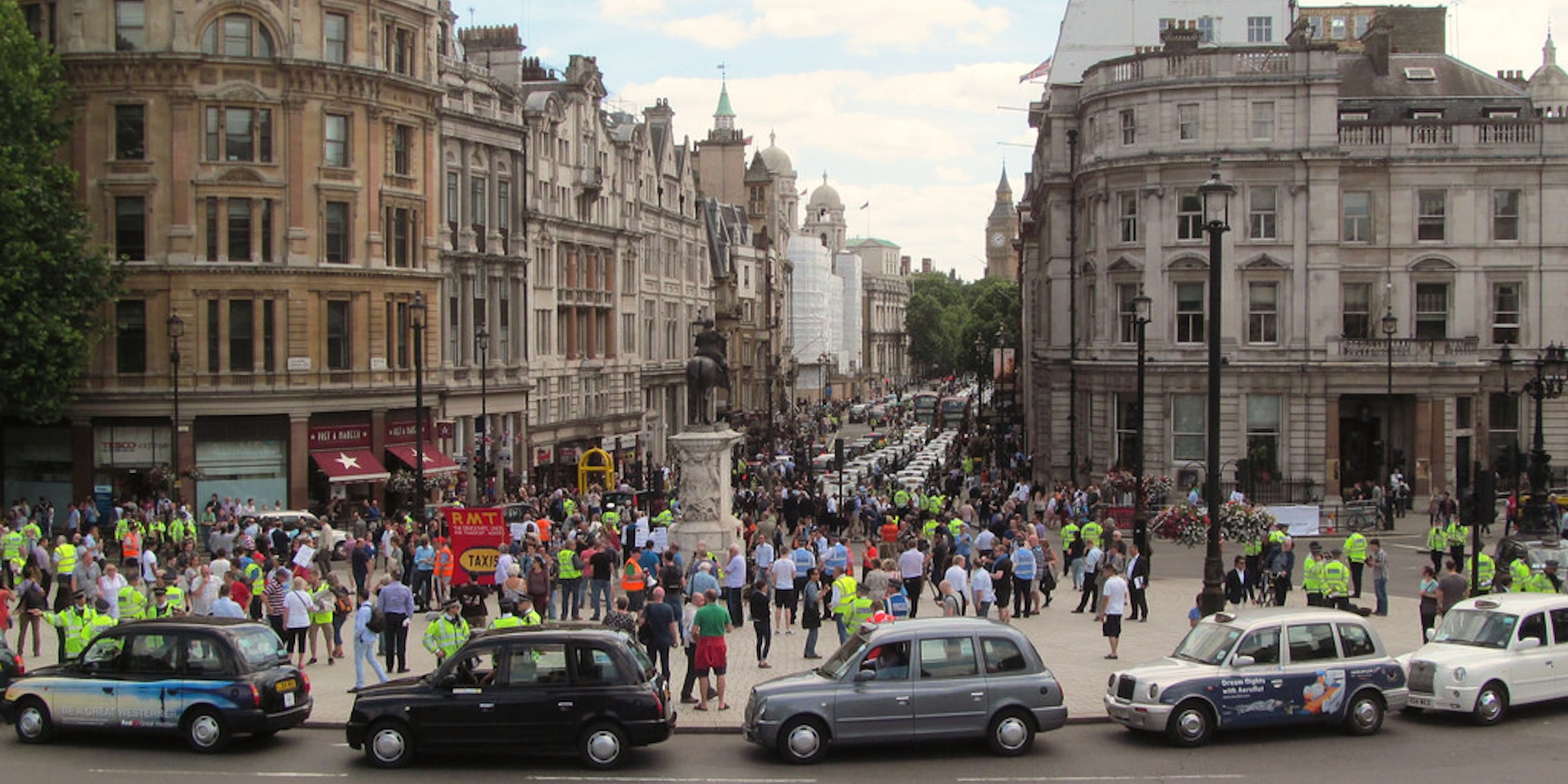 All of Uber’s controversies, in one handy map

There’s no tech company quite as controversial as the personal car-hailing service Uber. In 2014, the company was embroiled in some very high-profile missteps, including one executive threatening a journalist at a press event.

Uber might be trying to cleanse its image in the eyes of the media and win back some goodwill with efforts like opening up data to municipalities, but regulatory issues, lawsuits, and competitor sabotage have led to a growing number of controversies for the company in the last year.

To better understand the extent of Uber’s increasingly fumbled public image, data scientists used Silk.co to make visualizations of the company’s missteps. “A World of Uber Troubles” uses data publicly available on Wikipedia and in news stories to create graphs of the global controversies, along with brief descriptions at each pin drop that explains what Uber is up against.

One caveat on the project’s page explains Uber’s year in a nutshell.

Note: This is a work in progress and some of the entries may be outdated but there are so many Uber issues its frankly difficult to keep up.

The Silk.co visualization breaks down Uber’s controversies by location, year, and type of opposition. For instance, it shows that about 30 controversies including lawsuits or bans are ongoing throughout the countries Uber operates in, and that the taxi replacement faces the most resistance from local regulatory actions. 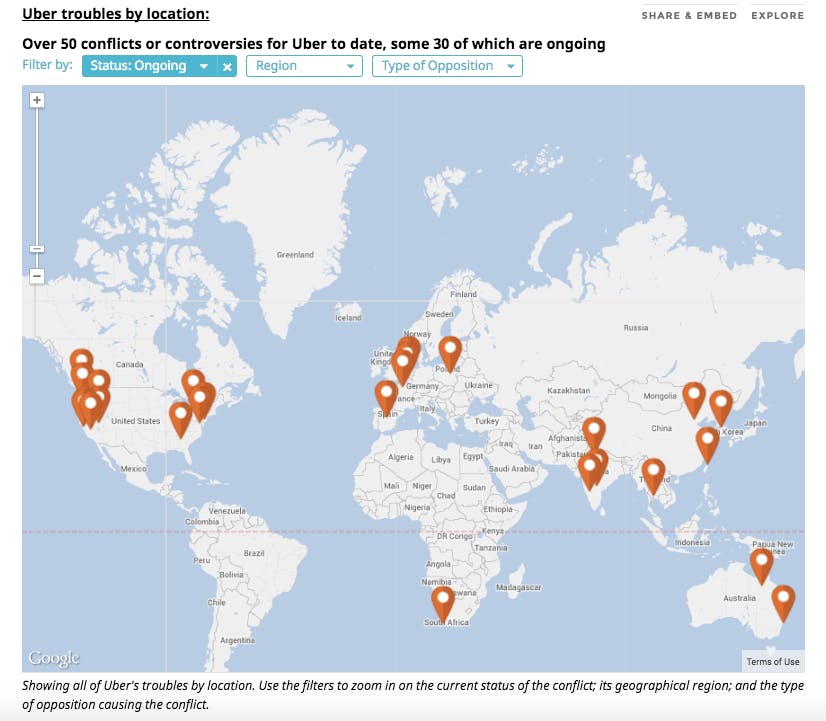 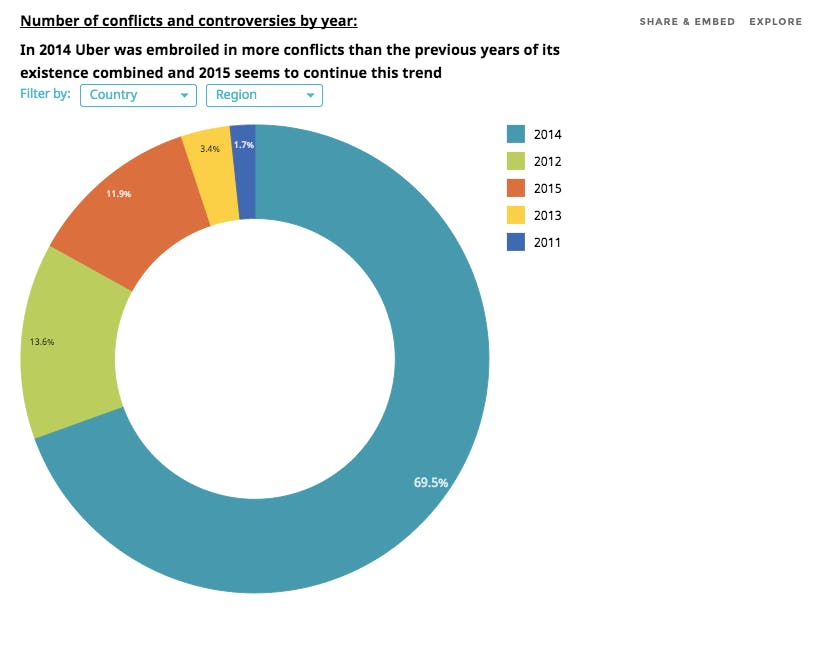 Uber faced more controversy in 2014 than all of 2011-2013 combined, but considering it’s only January and 2015 accounts for almost 12 percent of controversies, that slice of the pie graph may eventually overtake 2014. 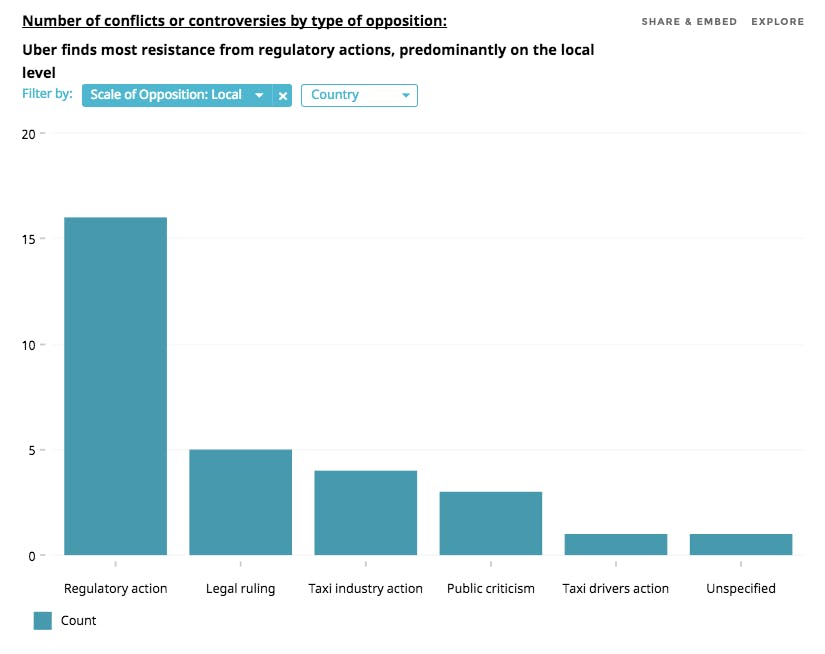 Though local city regulatory groups are some of the biggest Uber adversaries, it’s trying to appease municipal agencies by opening up its data in a win-win for both the company and presumably the city. Notoriously luddite-like cities can promote the partnership with a successful tech company, while Uber gets in the regulators good graces.

The open data project is starting in Boston, and is expected to scale to other cities—however, Uber was reluctant to share electronic trip data in New York, forcing temporary shutdown of multiple facilities.

The Silk.co chart will continuously be updated as Uber controversies evolve, and at this rate, it’s likely to be updated quite regularly.