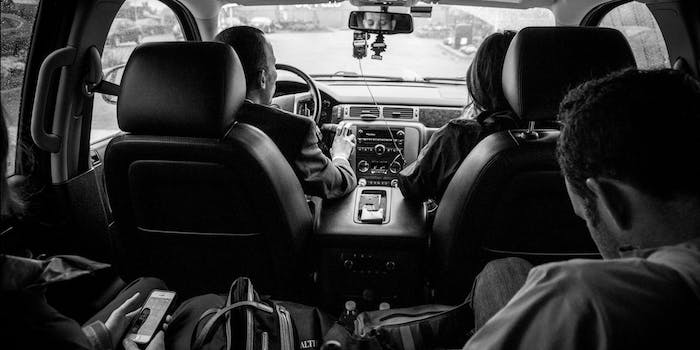 Uber is running a promotional event tomorrow that any riders concerned about safety might want to steer clear of. For one day only, Uber will kidnap you (for free!) in select cities, whisking you off to an unknown destination.

Tomorrow, fans in 10 global cities can help us celebrate with either an artist ride-along or exclusive live session.

Open up the Uber app at the time listed below for your city on Friday November 21st. Request the special car.

If you’re in a ride-along city and your ride is confirmed you’ll be one of the first to experience the new Spotify-enabled Uber cars. And if you’re really lucky, get ready for the ride of your life… !

If you’re in a live session city you’ll be picked up and taken to a secret location. Shh.

The kidnapping promo (our language) is tied to Uber’s new partnership with Spotify. It’s actually a cool idea in theory, but the timing couldn’t be worse considering Uber’s PR nightmare the emerged this week after a company exec was sick and tired of hearing criticism about Uber’s lack of concern for women’s safety.

The promo will show off Uber and Spotify’s new partnership in five cities, and you’ll have a chance to wind up in an Uber with Diplo, for better or worse. But if you’re lucky enough to be in New York, Singapore, Mexico City, Stockholm, or London, you’ll be whisked away to a “secret location.” Hopping in a car with a stranger is a leap of faith no matter how you slice it, but if you’re feeling wild tomorrow, here are the details:

Which cities and artists are included?
Exclusive live sessions will be happening in:

Artist ride-alongs will take place in:

The promo is truly a perfect storm of pre-planned PR and tone-deaf obliviousness. We can’t help but feel a little bad for Spotify, which notably does not have a record of sexually assaulting or otherwise causing bodily harm to its users.