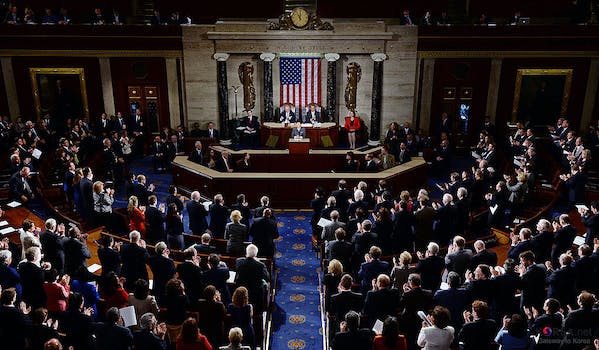 Time to learn from the mistakes of your predecessors.

2014 was a rough year for politicians who use Twitter.

Over the course of those 12 months, nearly 20,000 tweets that once stood proudly on those politicians’ manicured Twitter profiles were struck down. And with a slew of first-time lawmakers being sworn in this past week, there’s bound to be plenty more. Along with their new powers and responsibilities, these newcomers join hundreds of American politicians tracked by Politwoops, the Sunlight Foundation’s website that archives their deleted tweets. As the project lead, I’ve seen every deletion since it began two and a half years ago. So I’ve come up with five not-so-radical lessons that the new Congress could keep in mind.

Tip No. 1: Everyone loves a peek behind-the-scenes.

Twitter is a way for members of Congress to openly connect with the constituents who sent them to Washington. Seeing how your representatives spend their day can be fascinating: attending congressional hearings, voting, traveling across their district, meeting all sorts of constituents and special interests in Washington. Share the unique experience of representing the American people on Twitter and be transparent about it.

Maybe share more about how much time is devoted to fundraising, so we’re not “shocked,” as Sen. Dick Durbin (D-Ill.) once told NPR, at how much time politicians spent raising money. Political Party Time, another project of the Sunlight Foundation, tries to compile all the thousands of fundraisers politicians go to each year; but if you looked at their Twitter accounts, you’d think they never attended a single one. If you start sharing unusual things on your Twitter account, people will follow you.

There’s no mincing words here: A holiday greeting with a stock image is not interesting. A holiday press release isn’t interesting. A holiday video statement isn’t interesting. Sure, the trappings of congressional power force you to go through the celebratory motions of every holiday and name post offices like it’s not a waste of your time, but it’s a lot more interesting to share what you did during an occasion than to acknowledge an occasion. One politician who dared to be human, for a while at least, was Gov. Rick Snyder (R-Mich.) who shared this tweet: 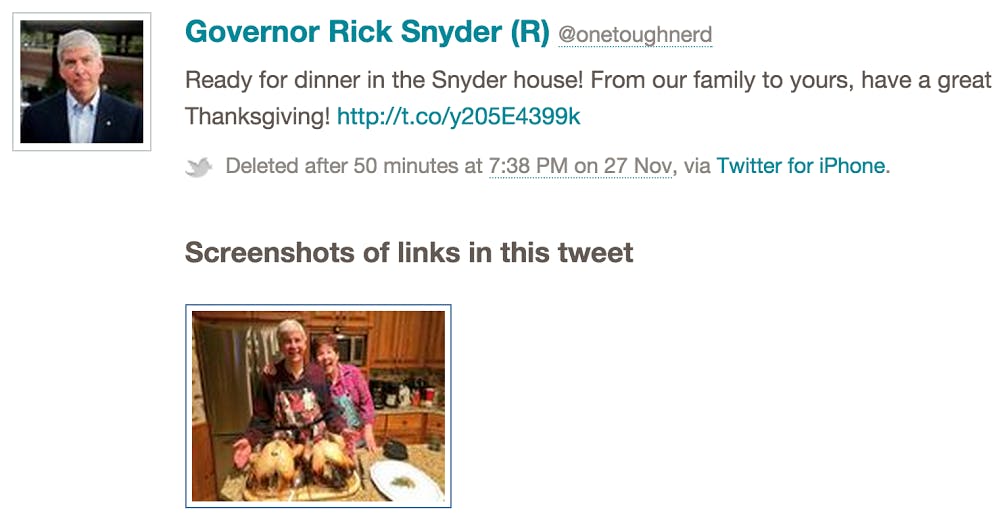 Less than an hour later, he deleted the smiling photo with his prize birds and replaced it with this tepid video and greeting: 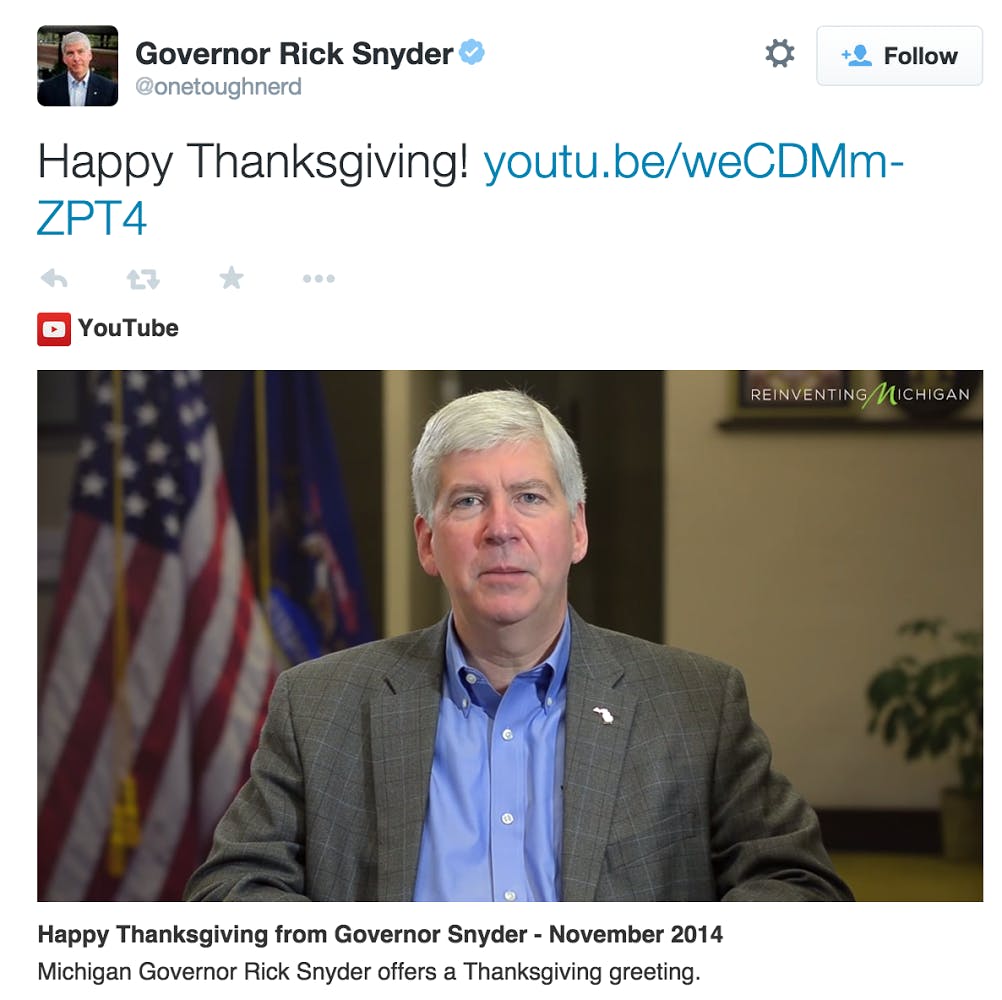 Appearing human means that you can be relatable to the humans you represent, and, who knows, maybe you’ll be able to get away with some mistakes (see Tip No. 4).

Stop sharing your press releases on Twitter! Please speak in the form of the medium. Do you talk to your mother with that stodgy mouth?

Twitter is a two-way street and is successful because it forces you to be pithy, so play along. Respond to your followers who ask you questions, engage with the haters and summarize your statement in a sentence. I’m sure there was one line in that press release you hoped would be quoted. Use that. Journalists are on Twitter, not waiting by the fax for your release.

Whenever I see a deletion that doesn’t make sense, I tweet at the politician and ask for an explanation. I’m stunned how rarely I get a response. The faster you explain something, the smaller the fallout will be. For example, Gov. Chris Christie (R-N.J.) deleted this tweet in late October:

A few minutes later, he tweeted out this response:

In publicly explaining the deletion, every article covering it included how it was a harmless autocorrect error, which everyone is familiar with. Compare that to when the official account for Rep. Stephen Fincher (R-Tenn.) deleted a similarly bizarre tweet in August and then never offered a public explanation. The deleted tweet said:

As news outlets covered the deletion and called his office, the person responsible fumbled out a series of responses. First, the communications director told The Hill, “a staffer’s Pandora account was somehow connected to the lawmaker’s Twitter account.” Speaking later with Politico, staffer Elizabeth Lauten admitted she was responsible. Lauten later resigned after remarking that the Obama children should “try showing a little class” and “Dress like you deserve respect, not a spot at a bar.”

Many politicians have their staffers run their accounts for them, which isn’t surprising because they are likely more familiar with how to use Twitter. These overworked staffers often get mixed up about which account they’re logged into, but a quick explanation could save a lot of unnecessary speculation (and probably a few jobs on the Hill).

Tip No. 5: Think for a second before you post

Most of those 20,000 deleted tweets didn’t even last a minute in the public eye due to minor typos, a lack of hashtags, or incorrect Twitter handles. There’s a better way: Take a few deep breaths and re-read your tweet before sharing.

When there’s breaking news, take much more than a second because there are higher costs to reacting recklessly than to reacting deliberately. In a closely followed 2012 Supreme Court case about the Affordable Care Act, a number of news organizations initially reported an incorrect ruling — duping politicians, who were eager to share their thoughts, into reacting to the wrong news. Rep. Dennis Ross (R-Fla.) tweeted “Individual Mandate ruled unconstitutional. Let Freedom Ring” and then deleted it after two minutes, as it was actually ruled constitutional. This past June, when an American soldier was released from Taliban captivity, many politicians responded to the news with celebration and thoughts of prayer for his family. When the details of his release became controversial and partisan, these politicians tried to backtrack on their comments—but Politwoops caught it all. Being correct and consistent is a lot more important than being first.

Hopefully lawmakers will read this list and improve their Twitter etiquette. If not, Politwoops will be there to catch all their mistakes.

Nicko Margolies runs the Politwoops project for the Sunlight Foundation.