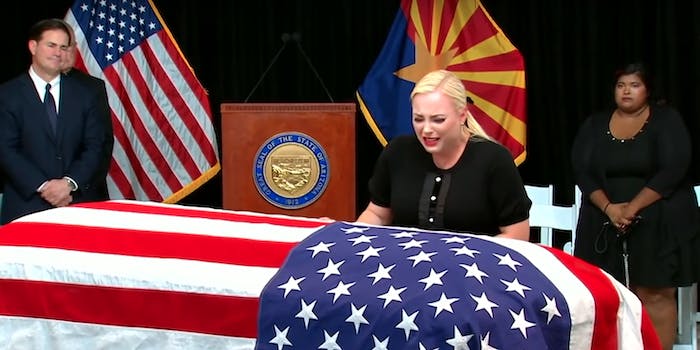 It’s not clear who was behind the suspended account.

Twitter suspended an account on Friday for posting an image that threatened violence against Meghan McCain, daughter of the late Senator John McCain.

The troll had used a picture taken at the Arizona Capitol on Thursday of McCain standing beside her father’s casket grieving, but had edited in a gun aimed at her. The image was accompanied by the words: “America, this one’s for you.”

The image sparked angry backlash online from those mourning the senator, who died on Aug. 25 after a year-long battle with cancer.

“Hey @jack, this has been up for half a day. It has been reported 100+ times. No response. Tell me why this is cool by you,” Domenech wrote in a since-deleted post that included a screenshot of the offensive tweet.

Twitter finally suspended this account this morning. No one should have to raise a ruckus or highlight this sort of thing publicly to get their attention.

I am going to delete the initial tweet now so no one has to see it. Still want an explanation for why something so obviously in violation took so much attention for Twitter to react.

Twitter’s rules threaten action against those that issue “threats of violence or wish for the serious physical harm, death, or disease of an individual or group of people.”

It’s not clear who was behind the suspended account.