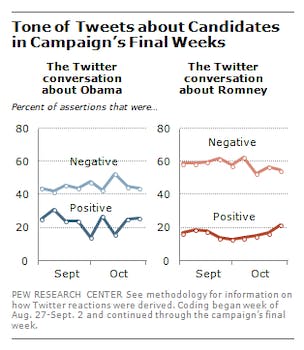 Negativity rules the day on the microblogging platform.

Depending on the event, Twitter leans to the left or right politically, according to a new study by the Pew Research Center. But regardless of what’s going on, there is always a healthy dose of negativity. The center released data on Monday that looks at the response on Twitter following eight major news events of the last year, with a focus on the 2012 election.

Interestingly, the research found that more often than not, Twitter’s reaction differs greatly from that of the general population. That’s because the study found what most people already knew or thought: Users of Twitter tend to be younger and are more likely to be Democrats: 57 percent of Twitter users identified as Democrats, whereas only 46 percent of the general public does. Also, half of the adults who used Twitter were under the age of 30, yet that group is less than a quarter of the general population.

The political opinions of Twitter also frequently varied greatly from the reality. For example, following Barack Obama’s less than stellar debate performance, 59 percent of people on Twitter thought the president did a better job than Mitt Romney. Offline, only 20 percent thought Obama bested Romney. Same with Obama’s reelection. Seventy seven percent of tweets were positive following the November election and yet only 52 percent of the general population was pleased with the results.

But before you think Twitter has a liberal bent, consider these recent moments when the site leaned a little more conservative. Just a few weeks ago, 48 percent of the general population thought Obama did well during his second inaugural address. But on Twitter, that number hovered at 13 percent. And when 39 percent of people approved of Obama’s nomination of John Kerry for secretary of state, only 6 percent of those on Twitter were overwhelmingly positive; 62 percent were neutral. 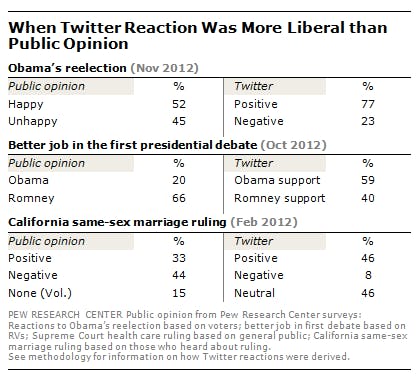 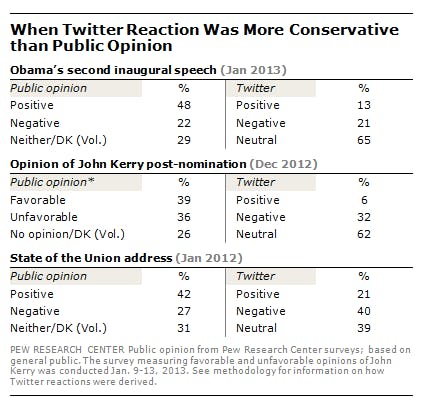 But the reaction of Twitter isn’t always a skewed version of reality. When Romney picked Paul Ryan as his running mate, 28 percent of both the general population and Twitter thought he was a good choice. The Supreme Court’s health care ruling saw similar results. 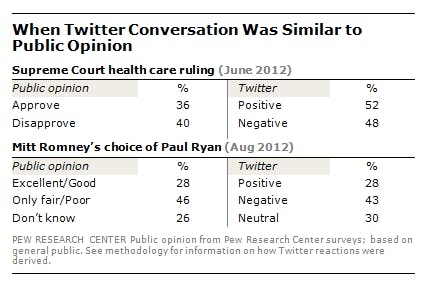 One thing is certain: Regardless of what’s going on, there will always be a healthy dose of negativity on Twitter. The Pew study found that negative comments highly outweighed positive ones about both candidates in the final weeks of the race. 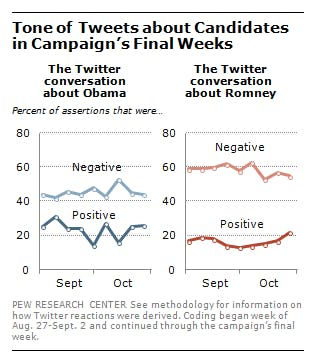 The data shows that Twitter may not be as representative of the general population as some may hope. However, it is still a good indication of what stories are getting the most reaction out of each side of the political spectrum.