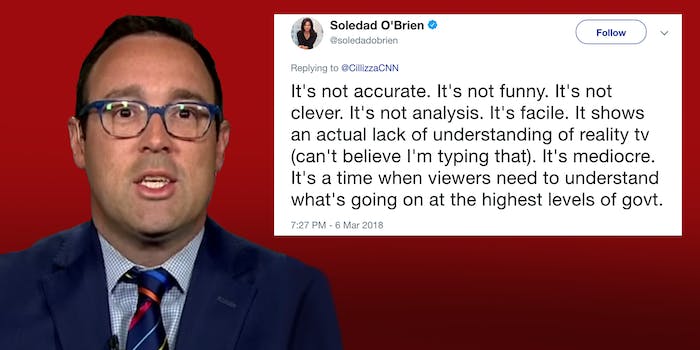 Twitter is living for this righteous destruction of a CNN pundit

This is so brutal.

President Donald Trump is president of the United States. You… probably already knew this. What you may not have known is that Trump was once the host of a reality television called The Apprentice.

But what will really blow your mind is that the frenetic, chaotic nature of his administration is somewhat like a reality show.

It’s a take that’s never been uttered on the internet before.

Thankfully, CNN take-haver and person who quote tweets the president with incisive commentary like “this is the president of the United States” Chris Cillizza is here to set the record straight. The Donald Trump White House is like a reality show.

Again and again, Trump’s White House has looked for all the world like one giant reality show — with the same strong personalities, rivalries, back-biting and surprise plot twists that have made watching other people live their lives one of our culture’s favorite pastimes.

Tuesday, for example, would make one hell of an episode.

Is there anything more reality TV than rapidly rising and then collapsing fortunes? The man or woman who you think is for sure going to win “Survivor” or get the final rose (do they still do that?) on “The Bachelor” suddenly falls into disfavor and is out before you blink.

You never see it coming! The reversal of expectations suggests anyone is vulnerable. Anyone can go at any time. It makes the show — or, in this case, the White House — that much more difficult to tear yourself away from, since you really can’t predict what will happen next.

Except that, while people have hung on every twist and turn of this administration, that’s for one very not-insignificant reason: The things the president does have real-world consequences, unlike, say, if Richard Hatch gets brought back for an immunity challenge on Survivor 45.

See, one thing matters and one doesn’t. It’s as simple as that, and maybe don’t write about it as kitsch. Because it isn’t. Thankfully, Twitter was here.

Let's break down all of the problems with this @CillizzaCNN "analysis" https://t.co/XSZj9Ut2tL. (Feel free to skip the article and not give CNN the clicks for this nuclear hot take).

First, the overarching problem: Even if the Trump White House might function as a can't-turn-it-off reality show, Cillizza never once acknowledges that there are actual people's lives and livelihoods on the line (and I don't mean people who have, however briefly, WH jobs).

The stakes of reality TV shows are low: who gets a record deal, or who gets a job in a relatively small, family-held real-estate and lifestyle branding company, or (my favorite) who gets a feature in Food and Wine magazine.

Appparently the bar for political criticism has lowered to meet Trump. https://t.co/u8Q2WN8tVr

This is not reality TV, this is not about viewers, this is not entertainment. People's lives in the U.S. and around the world are impacted by the policies set by the Executive office. We should treat it with the seriousness it deserves. https://t.co/5oi8UHsleK pic.twitter.com/PMjlkQmQ7T

But no destruction was more utter and complete than former CNN contributor Soledad O’Brien, who came for Cillizza.

This terrible analysis by @CillizzaCNN is in part why people hate the media. https://t.co/xxRcAspyC1

Cillizza tried a bit of levity to salvage his bad-faith effort at producing pageviews.

Hey Soledad! Thanks as always for reading. https://t.co/XgvHJDgzPy

You're welcome. You have a big platform, be thoughtful about the stories you tell and how you tell them.

And then came this.

The only way my criticism would make sense is if I didn't read your article? *sigh*.

It's not accurate. It's not funny. It's not clever. It's not analysis. It's facile. It shows an actual lack of understanding of reality tv (can't believe I'm typing that). It's mediocre. It's a time when viewers need to understand what's going on at the highest levels of govt.

No one has ever been ended quite like that.

R.I.P. Chris Cillizza, indeed, which has been reflected on his Wikipedia page.

This been up on Wikipedia since last night. RIP Chris Cillizza and congratulations to @soledadobrien. Sometimes the internet is great. pic.twitter.com/Oes7YjLOWk