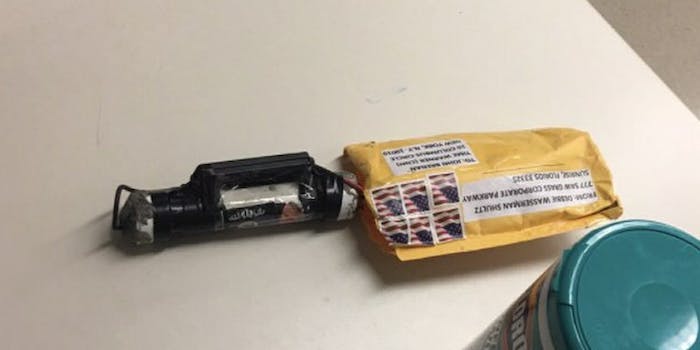 Law enforcement is trying to understand who is behind the attacks.

CNN chief White House correspondent Jim Acosta shared an image of the pipe bomb sent to the network’s New York City studio on Wednesday morning. Twitter users quickly spotted what appears to be an Islamic State flag on the device.

Photos of the bomb and package sent to CNN pic.twitter.com/nBq3ArtChJ

In the photograph, the explosive can be seen resting next to the brown envelope in which it was mailed, addressed to former CIA Director John Brennan, who has appeared on CNN as a commentator.

By zooming in on the image, several keen-eyed Twitter users were able to make out the black flag of the infamous Islamic State, formerly known as ISIS. Photos on Twitter show what looks like the flag’s white logo and text on a black background taped to the device.

Why is no one talking about the images attached to the pipe bombs? There is clearly an ISIS flag on the device in NYC. @CNN @ABC @NBCNews pic.twitter.com/ZsvSZoWHft

A Daily Beast journalist has pointed out a clue to the motive behind the mail bombings that was hiding in plain sight – what appears to be an ISIS flag on the package addressed to John Brennan and CNN. https://t.co/vz50cpEAq5

Others users are skeptical that the emblem is a clue to who might be behind the bomb, suggesting instead that the flag is there to mislead.

That's also why the ISIS flag was placed on the bomb. The bomb maker/makers knew this would get flagged in screening, found and then reported on like crazy.

The bomb, which investigators say was delivered by courier, is one of several that were intercepted on Wednesday. Packages containing potential explosives were sent to high-profile Democrats Hillary Clinton and Barack Obama, and another was discovered at the offices of Rep. Debbie Wasserman Schultz (D-Fla.).

Wasserman Schultz’s name and address was given on the CNN’s suspect parcel as a return address.

The U.S. Secret Service described the devices as “rudimentary but functional” and pipe bomb-like, containing explosive powder and projectiles like shards of glass.

Law enforcement agencies are still working to identify who might be behind the string of attacks.