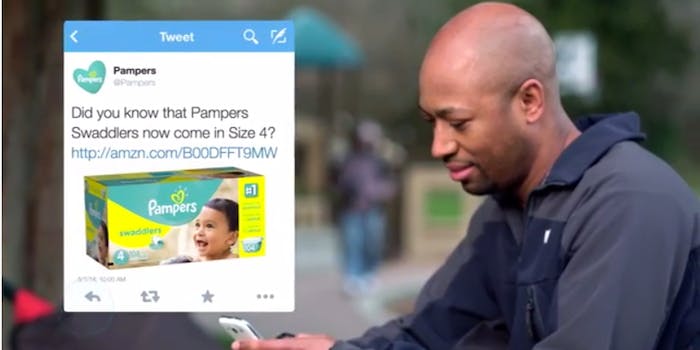 Twitter and Amazon team up for #AmazonCart e-commerce feature

Because social! That's why.

Twitter and Amazon have paired up for an e-commerce program called #AmazonCart. Now, users who sync up their Twitter and Amazon accounts can add items to their Amazon shopping cart simply by tweeting about them.

#AmazonCart only works when users reply to a tweet with an Amazon product link. That means tweeting “I want Nike shoes!! #AmazonCart” won’t magically put a pair of Air Jordans in your account.

Using #AmazonCart does not let users buy the item directly from Twitter. (Nor are you charged automatically after posting an #AmazonCart tweet.) Instead, users log into Amazon later to complete the purchase. The @MyAmazon account will send a follow-up reply tweet updating users about the status of their item.

#AmazonCart will only work in the U.S. and U.K. for now, and in the U.K. it is called #AmazonBasket.

This e-commerce partnership highlights how eager both parties are to forge connections between social networks and online retailers, but the program itself is odd. The big idea is that people who use Amazon and Twitter are regularly finding stuff they want to buy in their Twitter feed, but it’s too inconvenient to switch over to Amazon to make that purchase. Not sure how many of those people exist, but OK.

With investors worried about its growth rate, Twitter is especially keen to establish new business models, and Amazon is a strong choice for a partner. But the specifics of the #AmazonCart program aren’t promising, especially for Twitter. An Amazon spokesperson told CNET that Twitter will not get revenue for items placed in the cart through this feature and expressed interest in working with other social networks.

I suspect both Twitter and Amazon are overestimating how many people would want this service. It doesn’t sound like it will be all that convenient, since users will still have to go to Amazon’s website to make the actual purchase, and it requires that people publicly place items in their carts. Also, Twitter users may be more annoyed than excited by #AmazonCart if it primarily ends up increasing the number of tweets about products from retailers in their feed.