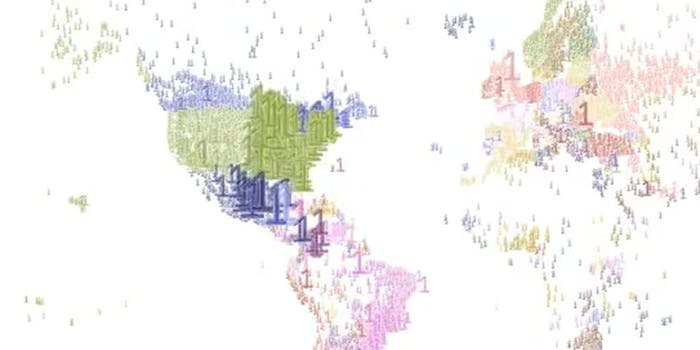 Remember, remember, the eleventh of November

A data-visualization expert who works for Twitter shows the information network's good and bad sides.

If so, you were far from alone, as a new video from Twitter shows. Data-visualization expert Miguel Rios, who works for the San Francisco-based information-sharing network, showed tweets mentioning the date rippling across the world time zone by time zone.

So that’s one side of Twitter, a company embracing the beauty its hundreds of millions of users create.

And then there’s another side of Twitter, also exhibited by Rios on Monday. The site, known for its up-and-down outages in its early days, has been experiencing glitches again.

So did Rios, who both makes a living and exercises his creativity through the data Twitter throws off, express sympathy for people who weren’t able to access Twitter’s full range of information?

Apparently, not. “I hear social media experts are freaking out right now,” Rios tweeted Monday afternoon. Rios linked to a Twitter support status update that indicated some accounts couldn’t see how many people were following them on Twitter—a key number many Twitter users, not just “social media experts,” watch to understand how they’re connecting with others.

The beautiful 11/11/11 video and Rios’s snide crack together serve as a reminder: Twitter has way more data than you do, and its employees have no qualms about reminding you of that fact.