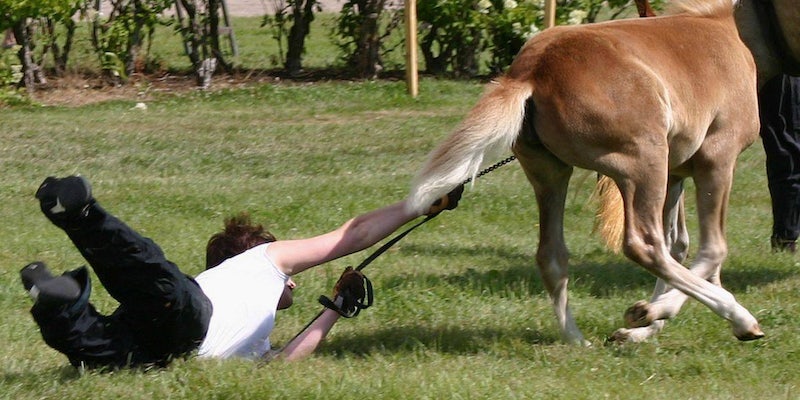 You have to see this. Turkmen can't.

Turkmenistan has reportedly gone into Internet lockdown, trying to keep its citizens from viewing a video of its president falling off a horse.

Sources inside Turkmenistan have said that social networks, where the video has been rapidly passed around, have halted entirely, and the Internet in general is extremely slow there.

You have to see this, because Turkmen can’t:

The video, which has just under 100,000 views as of this writing, shows a horse and rider taking a sudden tumble. The horse gets right back up, but its rider stays down, quickly swarmed by attendants and then taken away in a van. That’s President Gurbanguly Berdymukhamedov, according to Eurasianet, who had just won a kilometer-long race on a horse dubbed “Mighty.” Berdymukhamedov won $11 million for the victory, which he donated to fund that promotes Mighty’s breed.

An anonymous citizen in the crowd took high-quality footage of the fall, which quickly went viral online. The anonymous purported videographer told the Associated Press that Berdymukhamedov returned after half an hour to accept his prize.

The Turkmenistan media has put word of Berdymukhamedov’s stumble on lockdown, allowing no mention of it in official newspapers and stopping television footage right after he crosses the finish line. Opposition news site Gunmdogar has reported that officials at the race tried to confiscate all electronics from participants.

Turkmenistan is one of Reporters Without Borders’ official Enemies of the Internet, “imposing drastic censorship, resulting in a ‘Turkmenet’ purged of any political or social topic.”