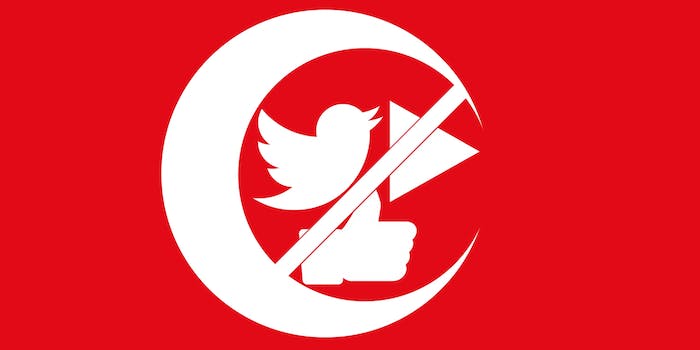 It stems from Tuesday, when two members of the Turkish leftist group DHKP/C, recognized by the U.S. as a terrorist organization, took a public prosecutor hostage in his Istanbul courthouse office. A photo that depicted one member pressing his gun against prosecutor Mehmet Selim Kiraz’s temple started to go viral, prompting the government issued an immediate gag order on news of the incident.

But because of Turkey’s new Internet law, which encourages ISPs that have trouble censoring a single link to instead block entire domains, users in Turkey have since reported inability to access Facebook, Twitter, and YouTube, too.

There’s plenty of precedent for this kind of censorship. The Turkish government has used courts to issue 150 gag orders in the last 4 years. From corruption scandals to mining disasters, any news that shows government weakness is prone to censorship.

According to Turkey’s internet law, ISPs are obliged to implement court orders within 4 hours, leading to censorship of multiple news articles from more than a dozen of the country’s most popular Turkish news websites. It also bans reports from The Independent (UK), Mirror (UK), The Post (Netherlands), ABC (Spain) TGCOM24 (Italy), Protothema (Greece), ValueWalk (USA), 1ClickNews (USA), and News.com (Australia). Users in Turkey who click on any of these links see a blank page.

Twitter, which Turkey has previously banned outright for not immediately responding to such orders, acted swiftly. Within five hours, Twitter sent emails to at least 60 users saying “in order to avoid being completely banned in Turkey, we have withheld your status / your account.” Many of the accounts named in the order had previously been targeted for censorship in previous censorship orders.