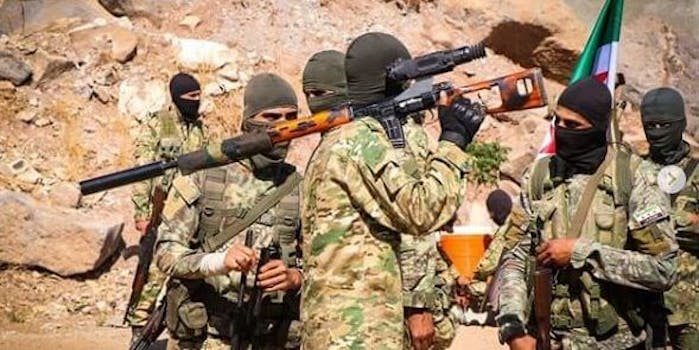 Telegram is hosting videos of extrajudicial killings in Syria

The UN says the video 'may amount to war crimes.'

A video posted online from the battleground in Syria shows a Kurdish prisoner being executed.

Turkey launched an invasion in northern Syria on Oct. 9, following the U.S.’s abrupt announcement that it was changing course and withdrawing its soldiers from the area. Since then, harrowing images of civilian casualties have emerged, Turkey has blocked internet access, and engaged in a public relations blitz to try to control the narrative.

On Oct. 12, the pro-Turkey Telegram channel Jarablous alkabous posted a graphic video on the site of an extrajudicial killing by Syrian Islamist rebel group Ahrar al-Sharqiya, part of the Turkish-aligned Syrian National Army (SNA). Rojava Information Center says that Ahrar al-Sharqiya is “the jihadist militia Turkey is preparing to lead its assault on NE Syria.”

In the video, an English translation of which was posted by Dlshad Othman, a man runs towards a group of soldiers standing on a dusty battlefield next to a prostrate man amid yelling, shots firing and cries, possibly from the wounded.

“The pigs of the [PYD] Party! Their prisoners! Kill them! Allahu akbar! Film me!” he yells. Hold [my phone], film me. Film me shooting him with this sniper rifle!”

He then shoots the man lying on the ground several times.

(The PYD Party, or Democratic Union Party, is part of the Syrian Democratic Forces, SDF. Turkey characterizes these as terrorist groups, a claim others refute.)

That same day, the Syrian Democratic Council announced that Kurdish politician Hevrin Khalaf was killed in a similar incident. Kurdish authorities allege that an autopsy determined that she was tortured.

Al Hareth Rabah, who said he is traveling with the Ahrar al-Sharqiya as their photographer, told the Observers that she and the other occupants of the vehicle failed to stop at a roadblock.

“It was because of that that all these passengers were killed, also on October 12, in the early morning,” he said.

Rabah said that some who stopped at the roadblock were taken prisoner. “However, some of the drivers didn’t want to give themselves up and resisted. Some of them opened fire. Others ran over our men. So the fighters neutralised them,” he reportedly said.

Journalist Harald Doornbos claims that Rabah is actually a member of Ahrar al-Sharqiya, the Turkish-aligned forces.

8/ Rabah isn't just a cameraman who on that day was embedded with Ahrar al-Sharqiya.

He is their media man &member of Ahrar al-Sharqiya.

This is what Rabah posted on his Instagram, 4 days before start of the Turkish operation:

Another video published on Telegram by Jarablous News shows soldiers walking around Khalaf’s bullet-ridden vehicle, Observers reports. A person lies on the ground nearby, apparently deceased.

That day, the Syrian National Army reportedly launched a committee to ensure prisoners and civilians were respected. Also that day, Jarablous News Telegram channel asked fighters “not to publish any video filmed during the battles because it distorts our reputation.”

Extrajudicial killings of prisoners of war is prohibited under the Geneva Convention, of which Turkey is a signatory.

“Under international law, summary executions are serious violations, OHCHR [the UN human rights office] said in a statement, and may amount to a war crime,” UN reports.

Yesterday, President Trump, who has been heavily criticized for his decision to abandon the U.S.’s Kurdish allies who helped topple ISIS, praised Turkey for the “incredible outcome.”

“They had to have it cleaned out,” he said of Turkey’s invasion of the region, where it claims it aims to create a safe zone to resettle millions of refugees from the Syrian Civil War.

Referring to Kurds living along Turkish border in Syria, Trump says of Turkey, "they had to have it cleaned out." pic.twitter.com/W8J7IFctO3

“I just want to thank and congratulate President Erdogan. He’s a friend of mine and I’m glad we didn’t have a problem because frankly he is a hell of a leader and a tough man, a strong man.”