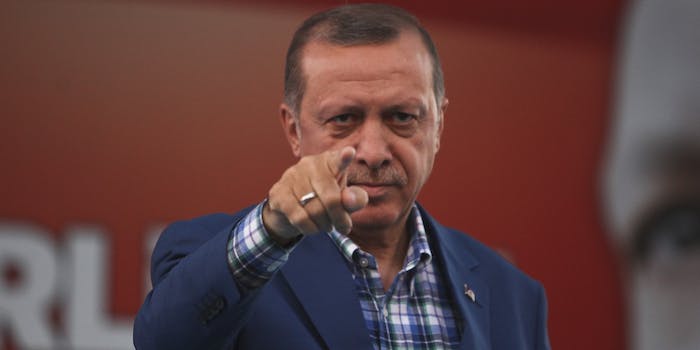 Mahalli was detained earlier this week after a pro-Erdogan news channel, A Haber, targeted him on live broadcast. The anchor of A Haber’s show, Erkan Tan, displayed Mahalli’s tweets, claiming that the Syrian journalist supports murder of Muslims in Aleppo, and urged the audience to target Mahalli.

In his displayed tweets, journalist Husnu Mahalli was in fact criticising the bias of Turkey’s pro-government media in their report on the Syrian conflict:

English translation: “In Libya, people are slaughtering each other, but no news on [Turkish] media. Syrian army clears out the murderers from Aleppo, media goes on rampage.”

A Syrian-born journalist who also holds a PhD on Turkish-Arab relations, Mahalli has provided insights on the region since the beginning of the Arab Spring. In his statement provided in court, Mahalli said he had advised Erdogan on Middle Eastern politics and was invited by Erdogan himself to acquire Turkish citizenship in 2011. However, his more recent criticism on Turkey’s role in the Syrian conflict was not welcomed by the government.

The charges prosecutors brought against Mahalli mainly argues that he portrays the Turkish government negatively. In the interrogation record, obtained by news website T24, the prosecutor quotes an interview with Mahalli in which he notes that the date of Turkey’s recent military intervention in Syria was chosen on the anniversary of the Battle of Marj Dabiq in 1516, which led to Ottoman Empire’s annexation of Syria. With such symbolics, Mahalli argues, Turkey’s president was playing on the nationalist rhetoric to boost his domestic support.

Mahalli is not the first journalist targeted for his remarks critical to the government policy: Bulent Kenes, the editor-in-chief of daily newspaper Today’s Zaman, which was later seized by the government, was arrested for his tweets on government corruption. Ebru Umar, a Dutch-Turkish columnist, was briefly detained for criticizing Erdogan’s nationalist rhetoric after being targeted by pro-Erdogan trolls.

However, Mahalli’s arrest signifies a particularly dangerous period in the declining state of free speech and press freedoms in Turkey.

The Daily Dot reported last week on the mass arrests of users for their critical social media posts. Following the Istanbul bomb attack on Dec. 10, pro-government media claimed a special police line for reporting cybercrimes received more than 5,000 reports on social media users for “terror propaganda.” The Ministry of Interior later stated 568 people were detained within three days on charges that include “making propaganda of a terrorist organization on social media.”

The case of Husnu Mahalli, with him being targeted on live broadcast and promptly jailed, suggests that the scale of the attacks against journalists in Turkey is getting larger and more serious. According to International Press Institute research, Turkish journalists have been facing targeted online harassment by pro-government social media users, particularly in the last year. In a special report, Human Rights Watch described Turkish government’s crackdown as a “ruthless assault” on critical journalism. According to the Committee to Protect Journalists’ 2016 prison census, Turkey is the worst jailer of journalists in the world with all of the 81 people behind bars accused of anti-state charges.