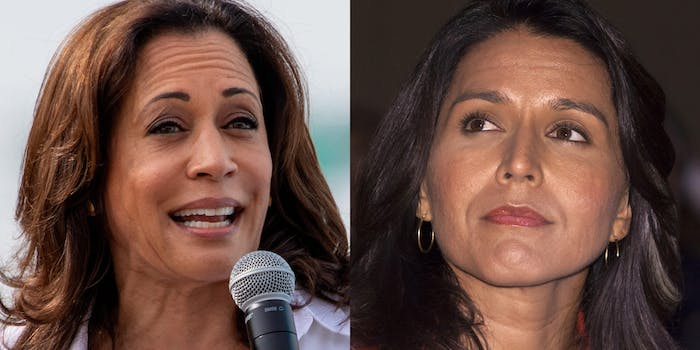 This week, the Democratic National Committee trimmed the September debate field to 10, and some notable names from the August debates were left off. Marianne Williamson, John Delaney, Bill de Blasio, and Rep. Tulsi Gabbard won’t be onstage.

All had their moments in the sun in the past two debates: Williamson getting memed, Delaney getting ridiculed, de Blasio standing tall. And then there was Tulsi, who gained viral acclaim for her attacks on Sen. Kamala Harris’ (D-Calif.) record as a prosecutor.

That set of a firestorm of virality, recriminations, and wild speculation. Gabbard was accused of being a Russian agent and Twitter bots were accused of propping up her campaign. Harris’ people were furious that it became a trending topic on Twitter, practically accusing the entire social media network of being in the pocket of a foreign power.

Yet Gabbard just pointed out a bunch of things that were already known of Harris’ past.

Bad blood lingers, so when news of Gabbard’s inability to reach the new debate went live, a counterpoint to #KamalaHarrisDestroyed started cropping up and eventually started trending: #TulsiDidn’tQualifyParty.

In honor of Tulsi Gabbard being cut from the next round of debates, I'm re-upping my article from the last debates, which addresses how Putin didn't need to evolve his strategy at all from 2016 thanks to certain candidates. #TulsiDidntQualifyParty https://t.co/GP6cqnHKlH

But whether it received enough tweets from just Harris supporters to trend isn’t clear, because Gabbard’s own fans jumped on it quickly, too.

Kamala Harris supporters throwing a #TulsiDidntQualifyParty because they won't have to see their candidate get Chris Christie'd again pic.twitter.com/Mz8cN9WROi

Kamala Harris people having a #TulsiDidntQualifyParty are exactly why Tulsi should and will remain in this race. We can’t let the establishment get away with propping up their lying candidate. She qualified. But you’re all too fragile to face truths so you had to cheat.

And despite a situation where Harris fans were upset that Gabbard’s clip of her debating Harris trended, Gabbard fans were equally ready to accuse Twiter of bias for allowing the anti-Gabbard hashtag trend.

If that makes no sense to you, that’s fine, because Twitter in 2019 is in a constant state of quantum superposition where everyone both is and isn’t a Russian bot.