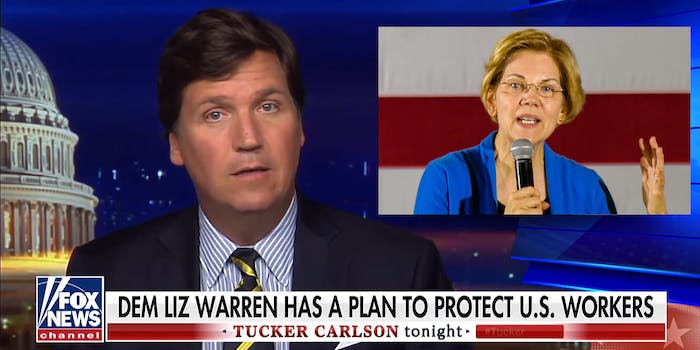 On his nightly news show—where he’s endorsed white nationalism, tossed out racist dog whistles, and flirted with cannibalism—Carlson spoke out about a candidate whose policies he supports. But, for once, it wasn’t President Donald Trump. It was Sen. Elizabeth Warren (D-Mass.). However, it didn’t take him long to pivot into what critics are calling pro-fascist views.

Warren on Wednesday released details of an economic plan, one of many she’s dropped in the past months, which she is calling “economic patriotism.”

“[T]oday I’m announcing that, as President, I would pursue an agenda of economic patriotism, using new and existing tools to defend and create quality American jobs and promote American industry.”

Warrens’ plan would “aggressively [use] all of our tools to defend and create American jobs,” and establish a new, cabinet-level position to “defend quality, sustainable American jobs.” The idea would be to protect American workers by investing in American products. Warren fashions it on the plan Germany embarked on in recent decades of “supporting domestic industries. “

“It’s just pure old-fashioned economics,” he said on his show, according to the Washington Examiner. “How to preserve good-paying American jobs. Even more remarkable: Many of Warren’s policy prescriptions make obvious sense. She says the U.S. government should buy American products when it can.”

Carlson began his show by reading a section of Warren’s latest plan—about iconic brands like Levi’s and Dixon Ticonderoga leaving America—then quizzed his viewers about who said it.

Now let’s say you regularly vote Republican. Ask yourself: What part of that statement did you disagree with? Was there a single word that seemed wrong? Probably not. Here’s the depressing part: Nobody you voted for said that, or would ever say it. Republicans in Congress can’t promise to protect American industries … So, no, a Republican did not say that. Sadly … Instead, the words you just heard are from, and brace yourself here, Sen. Elizabeth Warren of Massachusetts.

But Carlson said he couldn’t support Warren because she was socially liberal. His endorsement of her economic plan came because Carlson was happy that Warren didn’t mention “identity politics” or “climate change.” It got Carlson thinking about his dream candidate.

“There isn’t a caucus that represents where most Americans actually are: nationalist on economics, fairly traditional on the social issues. Imagine a politician who wanted to make your healthcare cheaper, but wasn’t ghoulishly excited about partial-birth abortion,” he said, before adding: “Why couldn’t you have a party that is economically nationalist and socially conservative? Why is that so hard?”

Tucker Carlson: Why couldn't you have a party that is economically nationalist and socially conservative? Why is that so hard? pic.twitter.com/6NUySPaAOv

That mix has been tried before though, and it sounds a bit like fascism. Users on Twitter pointed this connection out.

You mean, a party is that is both nationalist and socialist? https://t.co/P8RWSB7VXv

They don’t even try to hide it anymore. You have to be either a complete idiot or, I dunno, a Nazi sympathizer, to think, “hey we’re commemorating the 75th anniversary of D-Day, which was against an economically nationalist, socially conservative regime, why can’t we have that?” https://t.co/kk95zQOoXk

Carlson has yet to revisit his viral comments.