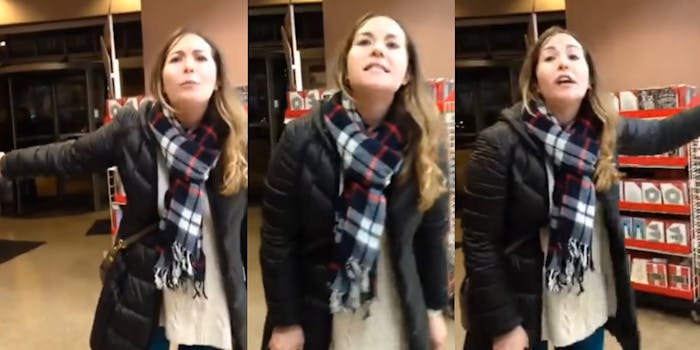 'And I voted for Trump, so there.'

’Tis the season for good food, good family—and totally freaking the hell out.

Case in point: This self-described Donald Trump voter, who berated employees at a Chicago arts and crafts store after she was allegedly asked to pay $1 for a reusable bag.

The Nov. 23 incident was captured by Jessie Grady at a Michaels craft store in Chicago’s Lakeview neighborhood. Grady told Patch that the unidentified woman, who is white, began screaming at two African-American employees because she felt she was being discriminated against because, the woman said, they were trying to “force me” into buying a non-disposable shopping bag.

The woman also accused one of the employees of saying something under her breath regarding Trump, although it is unclear from the video who brought up the president-elect first.

“And I voted for Trump, so there,” the woman says at the start of the video, which began after the woman started her rant. “You want to kick me out because of that? And look who won.”

After several minutes of yelling at Michaels employees, the woman confronted Grady, who is also white, for filming her and accused her 2-year-old daughter of stealing.

Grady, who continued to film the woman, defended the employees and repeatedly questioned the woman over her statements and her complaints.

Following the incident, Grady launched a GoFundMe campaign for one of the employees, whom she says sustained the brunt of the woman’s rant. The campaign has so far raised more than $2,500, well above the original goal of $400.

In an update on the campaign page, Grady added more details about the incident.

“There is so much you don’t see in this video. At least ten customers stood next to the manager and waited for the police,” Grady wrote. “That is what shocked the manager and myself the most, that people actually spoke up. You had to be there to see how the people were united.”