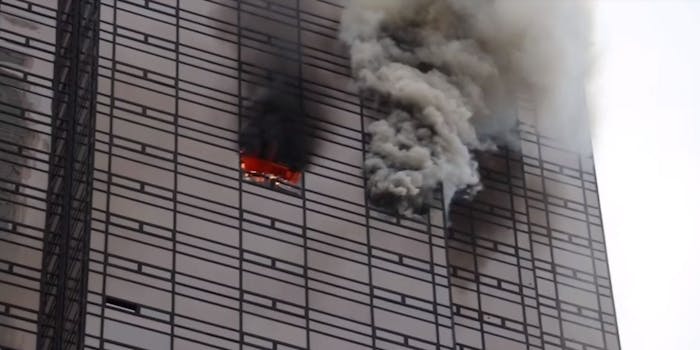 One resident said there was no evacuation plan.

One person died and four firefighters were injured in a fire that broke out on the 50th floor of Trump Tower in New York on Saturday night, according to the New York Post.

President Donald Trump tweeted about the fire but didn’t mention Todd Brassner, the 67-year-old resident who died. Instead, Trump talked about the success of the building’s construction.

There are reportedly no fire sprinklers on the upper floors of the building, but the Post wrote they’re not required by law in buildings of that age (Trump Tower opened in 1983).

One resident told the New York Times she received no notification that the building was on fire or any calls to evacuate. One resident, who happens to be friends with Michael Cohen, said he received a message from the president’s lawyer to leave.

Trump Tower resident says he was told to evacuate not by management but via a text from Trump's personal lawyer, Michael Cohen https://t.co/unuJykSHbu pic.twitter.com/5GdweyvWxL

Elevator service was also knocked out, and Lalitha Mason, who lives on the 36th floor, described herself to the Post as “terrified.”

“It was a very horrible experience . . . there was no evacuation system in place . . . we were at a loss of what to do,” she said. “I almost fainted. I thought we would die … My husband is disabled and we were helpless. All we could do is put wet towels under the door and pray.”