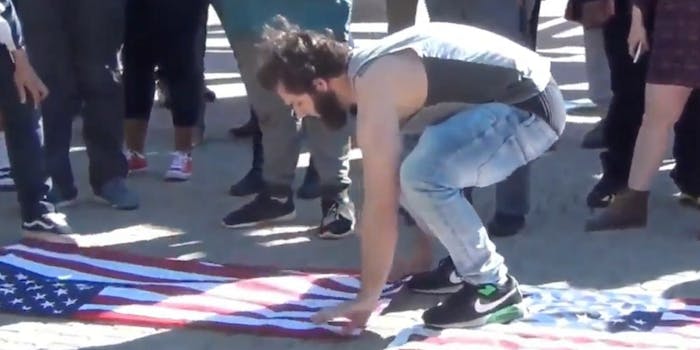 Republican presidential candidate Donald Trump had a wild day on the campaign trail.

Donald Trump’s presidential campaign has drawn large crowds of supporters and protesters since its inception, but Saturday was an unusual day on the campaign trail, even for Trump, whose candidacy has defied expectations.

The day after large anti-Trump demonstrations shut down a rally for the real estate developer in Chicago, a protester attempted to rush the stage during Trump’s speech in Dayton, Ohio. Trump later called for protesters to be arrested, and blamed their presence on Democratic candidate Sen. Bernie Sanders. Trump also tweeted that the man who rushed his stage had “ties to ISIS” and included an edited video of the man at a campus protest.

The Montgomery County Sheriff’s Office identified the would-be stage crasher as 22-year-old Thomas DiMassimo. DiMassimo was arrested for disorderly conduct and is scheduled to appear in court Monday, according to CNN.

“We must nonviolently shut down every Trump rally,” DiMassimo said in a statement to CNN. “We must stop this violent, foolish man from taking this country and destroying it.”

Trump supporters circulated an edited video that claims to reveal DiMassimo as an ISIS supporter and has since been removed from YouTube. In reality, the original video depicts DiMassimo participating in a student “Not My Flag” protest at Wright State University and does not reference ISIS.

When pressed on the fact that the ISIS video appears to be a hoax during a Meet The Press interview, Trump responded, “All I know is what’s on the Internet.”

Trump response to being told video connecting rally protestor to ISIS is a hoax: "all I know is what's on the Internet"

Trump called for protesters to be arrested during a rally in Kansas City, Missouri on Saturday evening.

“I hope they arrest these people because they’re really violating all of us,” Trump said after being interrupted by several protesters. He said he would pursue criminal charges against the protesters, a move he claimed would stop interruptions at future rallies.

“I hope these guys get thrown into a jail,” Trump continued, according to the Washington Post. “They’ll never do it again. It’ll destroy their record. They’ll have to explain to mom and dad why they have a police record and why they can’t get a job. And you know what? I’m going to start pressing charges against all of these people. And then we won’t have a problem.”

He also laid blame for the protesters’ presence at the feet of Sen. Sanders, calling them members of “Bernie’s crowd.”