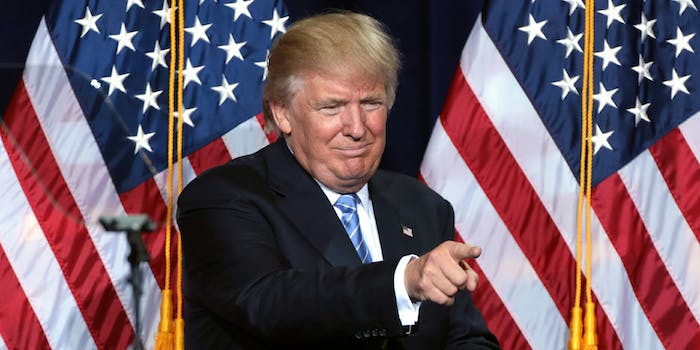 Libby was pardoned the same day as Comey's book launch.

President Donald Trump pardoned Lewis “Scooter” Libby on Friday, a former Bush administration official who was convicted of perjury in 2007, in a move some see as a vengeful retaliation for former FBI director James Comey’s unflattering new book.

Still others view it as an ominous sign as indictments continue to grow in Robert Mueller‘s Russia investigation.

Libby had served as chief of staff and senior advisor to former Vice President Dick Cheney between 2001 to 2005. He was convicted on multiple counts for lying to the FBI and obstructing justice during a special prosecutor investigation into leaks that had blown the identity of an undercover CIA agent.

President George W. Bush commuted Libby’s sentence of 30 months, but refused to pardon him. The disgraced staffer still served two years probation and was hit with a $250,000 fine.

“I don’t know Mr. Libby,” Trump admitted in a statement published by the White House. “But for years I have heard that he has been treated unfairly. Hopefully, this full pardon will help rectify a very sad portion of his life.”

What’s interesting about the pardoning of Libby, who Trump playfully dissociates himself from in the White House statement, almost to underline that the pardon was not about justice or Libby at all, is both the association and the timing.

The former advisor was taken down by Patrick Fitzgerald—a special prosecutor selected by none other than then-U.S. attorney general James Comey. More than that, news of the pardon came unexpectedly and quickly late Thursday. According to CNN, Libby’s attorney Bill Jeffress said he first learned of the potential pardon that evening not through legal channels but through a rush of murmurs within the media.

Comey’s unflattering exposé of his time under the Trump administration, titled A Higher Loyalty, was published on Friday. Late Thursday, the Associated Press had published a primer that revealed just how caustic the book’s criticism of the president would be, relaying Comey’s assessment that Trump was unethical and “untethered to truth.”

The book also makes a few digs at Trump’s appearance, joking about the president’s hand size and describing “bright white half-moons” under his eyes that he suggests came from tanning goggles.

On Friday morning, as more details emerged about the book’s contents, Trump blasted Comey as “a proven LEAKER & LIAR” in a ferocious tweetstorm.

James Comey is a proven LEAKER & LIAR. Virtually everyone in Washington thought he should be fired for the terrible job he did-until he was, in fact, fired. He leaked CLASSIFIED information, for which he should be prosecuted. He lied to Congress under OATH. He is a weak and…..

….untruthful slime ball who was, as time has proven, a terrible Director of the FBI. His handling of the Crooked Hillary Clinton case, and the events surrounding it, will go down as one of the worst “botch jobs” of history. It was my great honor to fire James Comey!

Hours later, the pardon for Libby, a convicted perjurer in an investigation initiated by Comey about leaking, was made public.

There is another parallel with this whole political maneuver, although it was denied on Friday by White House spokesperson Sarah Huckabee Sanders.

While Trump has had no relationship or expressed interest in Libby’s case to date, conservatives have long regarded the prosecution as an example of a special counsel overstepping its original mandate. This, of course, is similar to Trump’s low opinion of special counsel Robert Mueller’s investigation into Russian interference in the 2016 presidential election and allegations of Trump campaign collusion.

The president has regularly blasted the whole Russia investigation as invasive and “the single greatest witch hunt of a politician in American history!”

You are witnessing the single greatest WITCH HUNT in American political history – led by some very bad and conflicted people! #MAGA

There is, however, one winner in all this political performance and that is Libby, now totally relieved of the penalties associated with being a felon.