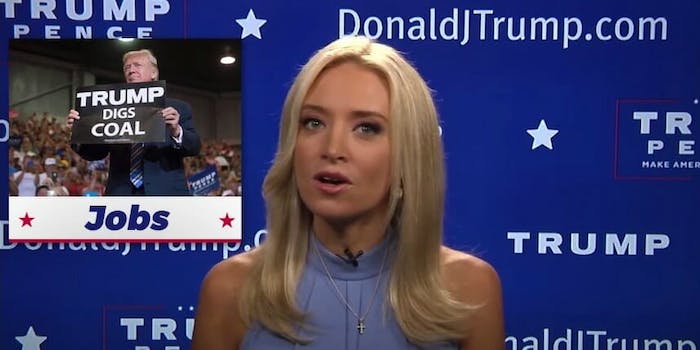 Kayleigh McEnany became one of CNN’s star conservative pundits during the 2016 election campaign, defending Donald Trump for every move he made and for every tweet he fired off. Along with Jeffrey Lord, McEnany was one of Trump’s biggest supporters on the channel.

On Saturday, she abruptly announced she was leaving CNN to start a new venture, and on Sunday, she debuted in her new role, as the face of a news program on Trump’s Facebook page.

The first video lasts 90 seconds, and it’s entirely pro-Trump, as she touted last Friday’s jobs report and reminded viewers that the economy has added more than a million new jobs since Trump took office. She gives explicit credit to Trump for this, saying “President Trump has clearly steered the economy back in the right direction.” McEnany also highlighted the RAISE Act (which would drastically cut legal immigration) and showed highlights from a ceremony Trump held that awarded a Vietnam War veteran a medal of honor.

Join Kayleigh McEnany as she provides you the news of the week from Trump Tower in New York! #MAGA #TeamTrumpPaid for by Donald J. Trump for President, Inc.

“That,” she said at the end of the video, “is the real news.” Almost immediately, social media users blasted her.

This is the type of propaganda you'd see in North Korea. It erodes the people's ability to discern truth and hold government accountable. https://t.co/LZlHhoEHgL

Here is a sneak peak of next week's Trump TV broadcast. Wait.. My bad, this is another dictator's propaganda network. pic.twitter.com/LuGxAuErBO

Even the conservative website Independent Journal Review panned the performance, writing that the “video posted on Facebook [contained] the production quality of a project from a junior high AV club taught by an out-of-work snuff-film director in the mid-1990s.”

McEnany’s new role seems to be part of a concerted effort by either the Trump administration or the 2020 Trump campaign to highlight only positive news from his presidency. Last week, Lara Trump—the wife of Eric Trump—appeared in a similar video saying, “I bet you haven’t heard about all the accomplishments the president had this week because there’s so much fake news out there.”

As of this writing, the Lara Trump video had 2.3 million views, while the new McEnany broadcast drew 1.1 million views since it aired.