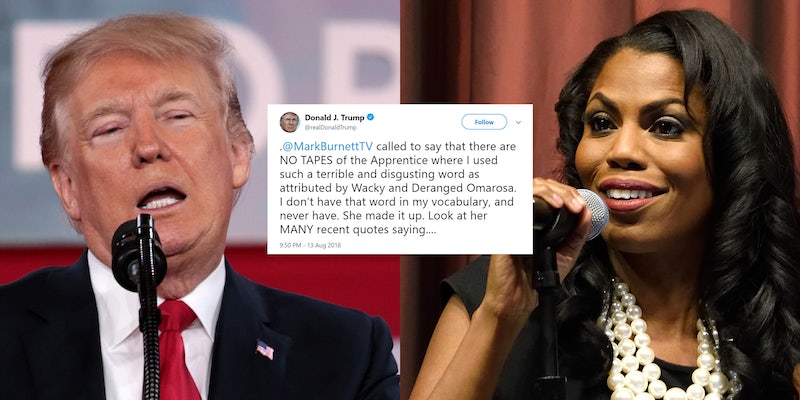 President Donald Trump tweeted late Monday that he’d received assurance from the producer of the Apprentice that no tapes existed of Trump using the N-word, tapes which have been the source of speculation for years now.

.@MarkBurnettTV called to say that there are NO TAPES of the Apprentice where I used such a terrible and disgusting word as attributed by Wacky and Deranged Omarosa. I don’t have that word in my vocabulary, and never have. She made it up. Look at her MANY recent quotes saying….

….such wonderful and powerful things about me – a true Champion of Civil Rights – until she got fired. Omarosa had Zero credibility with the Media (they didn’t want interviews) when she worked in the White House. Now that she says bad about me, they will talk to her. Fake News!

Which is odd, right? Why would you need the producer of the show you were on tell you there were no tapes of you using the word if … you never used the word? Trump later claims in the tweet that “that word” is not in his vocabulary, but it seems slightly less convincing prefaced by the need to deny the tapes.

Trump has, since he’s taken office, been obsessed with proving there is no truth to media speculation about damning tapes of him. He reportedly personally asked former FBI Director James Comey to investigate the validity of the infamous pee tape that was discussed in the Steele dossier.

The Apprentice tapes have been the source of similar speculation that over the course of filming, cameras caught the president making racist remarks.

That rumor got a boost last week when Omarosa Manigault-Newman said in the memoir of her time in office that the tapes were real. In the book, Manigault-Newman discusses herself and Trump campaign officials discussing the tapes in October 2016. According to Manigault-Newman, she met with Katrina Pierson, a campaign spokesperson, and Lynne Patton, an aide to Eric Trump.

She describes an October 2016 phone conversation with Lynne Patton, then-assistant to Eric Trump, spokesperson Katrina Pierson and campaign communications director Jason Miller in which they discuss how to deal with the potential fallout from its release.

“I am trying to find at least what context it was used in to help us maybe try to figure out a way to spin it,” Pierson is heard saying.

POTUS says former White House staffer @Omarosa lied when she called him a racist who has said the N-word on tape. But a new recording, obtained by @CBSNews overnight, seems to back up Omarosa's story that several Trump advisers discussed an alleged tape during the 2016 campaign. https://t.co/tV3R6P2TvE

Patton released a lengthy statement denying any conversation like that took place.

To be clear, at no time did I participate in a conference call with Katrina Pierson advising me, Jason Miller and Omarosa Manigault-Newman that Frank Luntz had heard President Donald J. Trump use a derogatory racial term – a claim that Luntz himself has also denied.

Patton also said that the source Manigault-Newman had for the tapes was a friend of hers, who also denied they existed.

Tonight, on the MSNBC program, Hardball, Omarosa revealed to the general public what she had told me last December: That former Apprentice producer, Bill Pruitt, was the original source of the “N-word” tape.

Based upon her conflicting accounts and the newfound information revealed in my statement, it should be abundantly clear to everyone that not only is her book a complete work of fiction, but that the existence of this elusive “N-word” tape is a figment of her imagination and merely a destructive tool of manipulation applied only when it best serves her interests.

While it may never be known if Trump ever did use a racial slur, he certainly has no problem using derogatory language to refer to people, as he did… uh… an hour ago.

When you give a crazed, crying lowlife a break, and give her a job at the White House, I guess it just didn’t work out. Good work by General Kelly for quickly firing that dog!