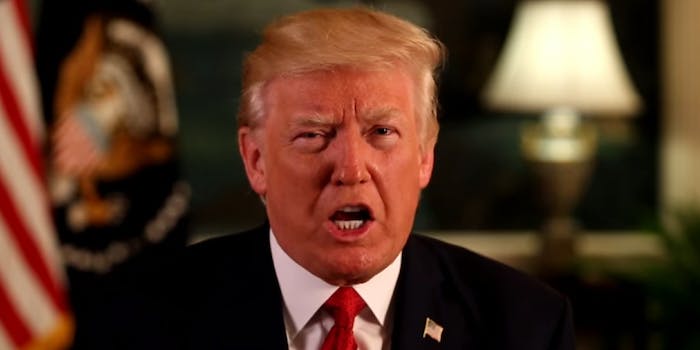 The daily intelligence briefing President Donald Trump gets reportedly must include visuals, “killer graphics,” and be as condensed as possible.

Several high-ranking intelligence community officials spoke with the Washington Post about Trump’s intelligence briefing each morning, describing the need to include maps, charts, videos and pictures in the documents while also keeping things short and to the point.

“That’s our task, right? To deliver the material in a way that he can best understand the information we’re trying to communicate,” CIA Director Mike Pompeo told the Post.

Trump’s preference for big pictures and short documents shouldn’t come as a surprise. In the past, Trump has said he did not need a daily briefing on what the intelligence community had gathered because he was a “smart person.” Earlier this month, Reuters reported that National Security Council officials strategically include Trump’s name in as many paragraphs as they can because he will continue reading memos if he is mentioned.

This preference for pictures, officials told the Post, is a reflection on Trump’s pre-presidential career, when he looked at renderings as a real estate developer.

But as president, Trump seems to have changed his tune on that decision. Now, every day, Trump sits at his desk with a Diet Coke and looks at brief picture-filled documents. The meetings last approximately 30 to 45 minutes, according to the Post, and often times run past their scheduled time.

“A president who I think came into the office thinking he would focus on domestic issues—‘make America great again’—has learned that you inherit the world and its problems when you’re president of the United States,”  Daniel Coats, director of national intelligence, told the newspaper.

Each day, presidents receive a “daily brief” that includes summaries from all 17 intelligence agencies highlighting developments in ongoing investigations. Some presidents preferred oral briefings, the Post reported, while others preferred to read materials in a narrative form.

Trump prefers to have “free-flowing conversations,” according to officials who spoke with the Post, and information that can be boiled down to a single page.