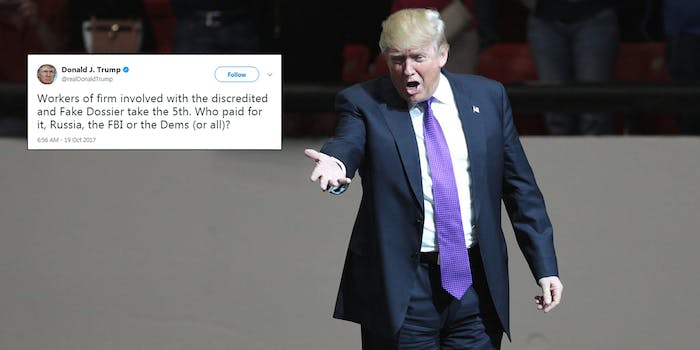 People within the firm who compiled it refused to testify, prompting Trump's tweets.

President Donald Trump suggested on Thursday morning that the now-infamous dossier containing the so-called “pee tape” was paid for by either Russia, the FBI, or Democrats—or a vast conspiracy perpetrated by all three parties.

Trump tweeted about the unsubstantiated dossier–which was compiled by Christopher Steele and who recently met with Special Counsel Robert Mueller–in response to several members of the firm responsible for its creation pleading the fifth during a meeting with the House Intelligence Committee.

“Workers of firm involved with the discredited and Fake Dossier take the 5th. Who paid for it, Russia, the FBI or the Dems (or all)?” Trump tweeted.

Workers of firm involved with the discredited and Fake Dossier take the 5th. Who paid for it, Russia, the FBI or the Dems (or all)?

The dossier alleged numerous connections between Trump’s campaign and Russia, and posits that the country compiled compromising information on Trump–including salacious details about Trump’s sex life. BuzzFeed News first published the contents of the dossier in January.

Members of Fusion GPS, the firm responsible for the dossier, were subpoenaed to appear before the House committee on Wednesday but invoked the fifth amendment, Fox News reports.

Trump’s open question about who paid for the dossier has, however, been settled. The dossier was originally intended as opposition research, CNN reported, and was first funded by Republicans during the 2016 primaries. Democrats continued to pay for it once it was clear he would be the Republican nominee.

Trump has blasted the dossier as “fake news.”