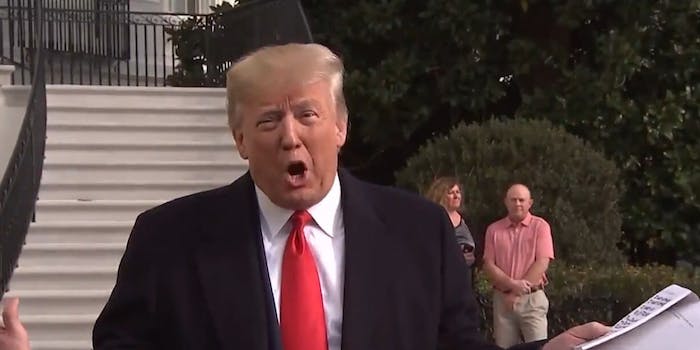 He thinks scribbling in Sharpie constitutes the 'final word' on impeachment.

In a move on the White House lawn that has become ritualistic, President Donald Trump shouted a statement to media as a helicopter propeller whirred loudly in the background.

The statement he read—from notes written in Sharpie—became an immediate meme.

Trump said that he’d been watching Ambassador Gordon Sondland’s testimony in the impeachment hearing on whether he’d used his office to coerce Ukraine into digging up dirt on political rival Joe Biden. Trump claimed Sondland had cleared him of wrongdoing by testifying that Trump told him “I want nothing,” when asked what he wanted from Ukraine.

And thus a meme was born.

When you wish upon a st….. I WANT NOTHING ! pic.twitter.com/Mbt1dj2TJ0

POLICE: The getaway car driver says you wanted to rob this bank.

MOBSTER: I want Nothing. I want nothing.

MOBSTER: Tell the getaway car driver to do right thing.

MOBSTER: This is my final word. pic.twitter.com/DqbMCifPRu

Someone PLEASE do this Whitney/Donald 'I want nothing' remix, STAT https://t.co/bx9cfYdXCf

can't believe he started his set with "i want nothing" back to back https://t.co/aV9QQca9gs

Dems be like: “And that you will receive in abundance!” pic.twitter.com/eqVzqDkSqP

To the tune of The Backstreet Boys "I Want it That Way" 🎶Tell me why chorus:

I want nothing
(I want nothing, no quid pro quo)
Tell Zelensky
(To do the righttt thingggg)
This is the
Final word from the president
Of the United Statessss

I WANT NOTHING, except Ukraine and China to investigate my political opponent–then you get rewarded.

Trump appears to believe that his statement just now will be “the final word from the pres of the U.S.” pic.twitter.com/gQ7J0pn8Jq

As usual, Trump’s loyal following was completely willing to take his every word as fact. Turning Point USA’s Benny Johnson earned himself a bit of a sub-roasting for referring to Trump’s notes as “receipts.”

“They can’t be receipts if you make them up yourself, you plagiarizing dumb dumb,” someone commented.

By and large, however, people were unconvinced. Susan Hennessey, Lawfare executive editor, was among those pointing out that the conversation to which Trump refers took place a day after news of the whistleblower complaint broke, on the same day that Democrats announced an inquiry into the Ukraine matter.

While some, like Hennessey, made serious points about the logical inconsistencies in Trump’s argument, most were content to dunk on him.

In this context, #IWantNothing is the rough equivalent of walking into a bank with a gun and money bag and saying

Normally when I want nothing I write it down twice in big black marker to remind myself. https://t.co/vxfBZ3Nl4q

[EXCEPT TO BE PARDONED BY PRESIDENT PELOSI] pic.twitter.com/i18xerpJtL

Trump's 'I want nothing' comment was on Sep 9, the day three Democrat-led committees launched investigations into Ukraine pressure campaign. Denial has to be read in that context.

I’m preparing to talk about civic engagement for an hour tomorrow and I have less notes than this 🤣🤣🤣 (re: I WANT NOTHING) pic.twitter.com/MHZmetV8zz