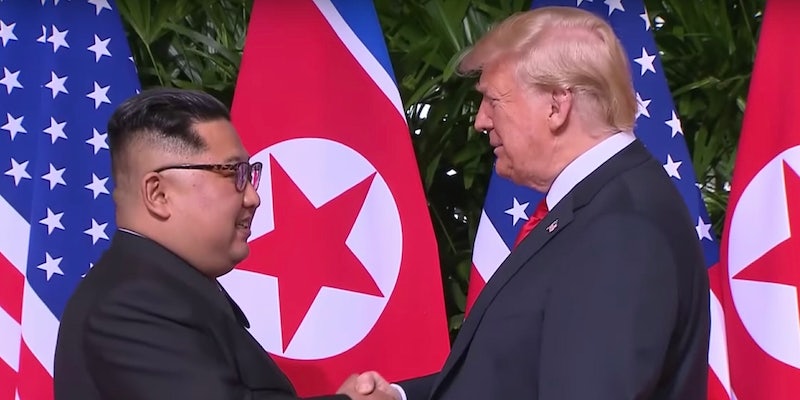 He didn't mention other countries or their transgressions.

Just hours after he gloated on Twitter about the outcome of his meeting with Kim Jong-un, President Donald Trump deemphasized the North Korean dictator’s totalitarianism and abuses of human rights.

In an interview with Fox News aboard Air Force One on Wednesday, Trump conceded that Kim has done “some really bad things,” but said other countries are “bad,” too. He didn’t mention other countries or their transgressions.

BAIER: "He has done some really bad things."

TRUMP: "Yeah, but so have a lot of other people have done some really bad things. I mean, I could go through a lot of nations where a lot of bad things were done." pic.twitter.com/AZxnuXQTqi

As the Hill pointed out, the Human Rights Watch called North Korea “one of the most repressive authoritarian states in the world” last year. Kim’s slew of human rights offenses include public execution, arbitrary detainment, forced labor, and systematic religious persecution.

In the interview, Trump complimented Kim for taking over the regime following the death of his father, calling him a “tough guy.”

“Hey, when you take over a country, a tough country, with tough people, and you take it over from your father, I don’t care who you are, what you are, how much of an advantage you have,” Trump said. “If you can do that at 27-years-old, I mean that’s one in 10,000 that could do that.

“He’s a very smart guy,” Trump added. “He’s a great negotiator. I think we really understand each other.”

Last year, Trump responded to Bill O’Reilly’s comment that Russian President Vladimir is a “killer” by saying “what do you think—our country’s so innocent?”