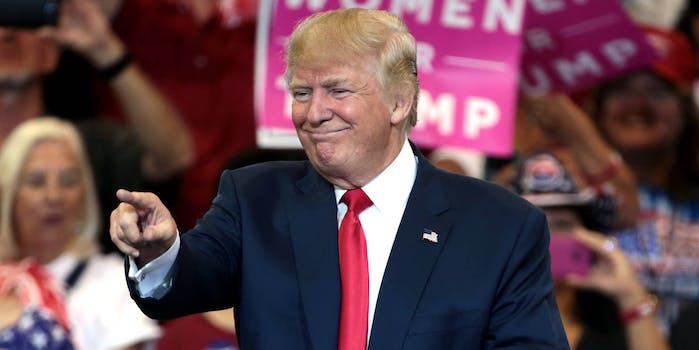 As news was breaking that Donald Trump would be the next president of the United States, an awful quote began rattling around the social media echo-chamber once again.

You know the one:

As with many memes, it’s unsure where exactly this came from, but it began circulating in October 2015, when Trump announced he would be running for office. The quote is purportedly from a 1998 interview with People magazine, but it’s completely fabricated.

“If I were to run, I’d run as a Republican. They’re the dumbest group of voters in the country. They believe anything on Fox News. I could lie and they’d still eat it up. I bet my numbers would be terrific.”

People magazine once hosted a fully accessible online archive. When the meme started landing in Snopes researchers’ inboxes, they decided to investigate.

They found no record of a People interview with Trump in 1998. Sure, the celebrity lifestyle magazine had covered him as a high-profile businessman in the 1980s and 1990s, but it mainly looked at his marriage troubles.

A spokeswoman from the People told FactCheck, another myth-busting site, “We combed through every Trump story in our archive. We couldn’t find anything remotely like this quote – and no interview at all in 1998.”

While sites like Snopes and Gawker fully discredited the quote this time last year, it’s refused to die. High-profile and respectable academics and public figures continue to circulate it, including, for example, this senior fellow at Harvard Business School:

"Republicans are the dumbest group of voters in the world. .I'd lie & my poll numbers would be terrific" Donald Trump, People Magazine, 1998

That’s why it’s important to check your sources—even if it totally affirms your angst or outrage.