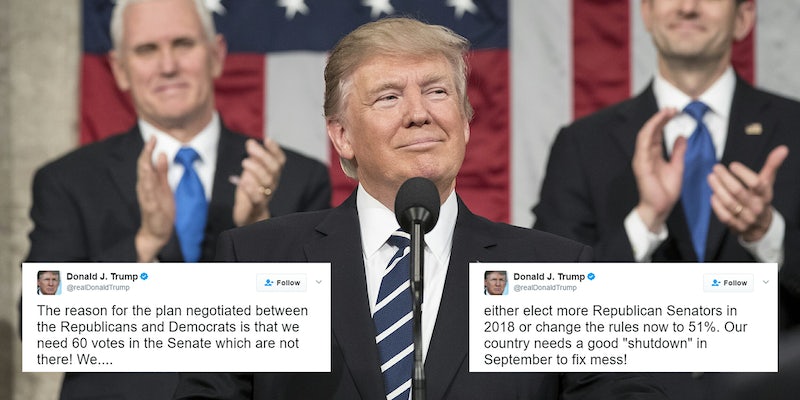 Trump warns of government shutdown, says minority Democrats have too much power

Despite Republicans controlling both houses of Congress and the White House, President Trump is frustrated with Democratic power.

Trump’s expressed frustration with the legislative process follows vows from Democratic lawmakers to force a government shutdown in an effort to negotiate more favorable stipulations in the federal budget. Their efforts succeeded, a government shutdown was averted, but the result has left a rift within the Republican party over a budget that many conservatives see as too favorable to Democrats.

The reason for the plan negotiated between the Republicans and Democrats is that we need 60 votes in the Senate which are not there! We….

either elect more Republican Senators in 2018 or change the rules now to 51%. Our country needs a good "shutdown" in September to fix mess!

The $1.1 trillion fiscal-year 2017 budget, which funds the federal government through Sept. 30, includes concessions from both Democrats and the GOP; however, high-profile parts of the Trump administration’s budget proposal were withheld.

The omnibus spending plan includes a $15 billion increase in military spending (Trump requested $18 billion); increases spending for the Department of Energy’s Office of Science by $42 million (Trump requested a $900 million decrease), as well as increases to other federal science efforts; maintains federal funding for Planned Parenthood; increases domestic discretionary spending (something Republicans hoped to reduce); and allocates exactly zero dollars for the Department of Justice to crack down on state-legalized medical marijuana.

At the top of the failure list for President Trump is his U.S.–Mexico border wall, for which Congress provided no funding.

The legislative filibuster, which requires a supermajority (60 votes) in the Senate to avoid rather than the standard 51 votes, has stymied Trump’s early presidency, with the Democratic minority successfully blocking key legislation supported by the Trump administration.

Trump could, theoretically, convince the Republicans in Congress to eliminate the legislative filibuster altogether, as it appears nowhere in the U.S. Constitution. (Supermajorities are only constitutionally required for amending the Constitution, impeaching presidents, ejecting senators, ratifying treaties, and overriding presidential vetoes.) However, doing so would greatly inhibit the power of the minority party, which could change as early as 2018.

Congress will consider the omnibus spending bill, known as H.R. 244, this week.