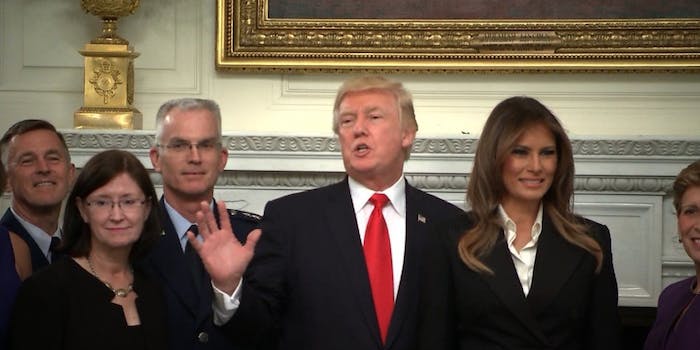 This is fine. Everything is fine.

Flanked by senior United States military leaders, President Donald Trump on Thursday evening dropped the ultimate cliffhanger: “Maybe this is the calm before the storm.”

The president’s ominous comments follow a meeting during which Trump discussed Iran and North Korea, two countries that sit atop the administration’s list of hostile nations. But what “storm” was Trump talking about? Nobody seems to know, leaving the world on edge with speculation of impending war.

“You guys know what this represents?” Trump said while standing for a photo with military leaders. “Maybe it’s the calm before the storm,”

“You’ll find out,” he responded.

Before a dinner with military leaders and their spouses, President Trump told reporters this was the "calm before the storm." pic.twitter.com/qulYqI5oB0

Prior to Trump’s foreboding tease, he told military leaders that his goal was to eliminate North Korea’s nuclear weapons.

“In North Korea, our goal is denuclearization,” he said, according to Reuters. “We cannot allow this dictatorship to threaten our nation or our allies with unimaginable loss of life. We will do what we must do to prevent that from happening. And it will be done, if necessary, believe me.”

The White House has not yet clarified what the president intended by his “calm before the storm” remark. And even Axios, a publication known for its White House insider sources, offers no clarification, suggesting that it “may simply be the president’s instinct for drama and photos that make him look strong, love of cliffhangers, and joy in flummoxing the press.”