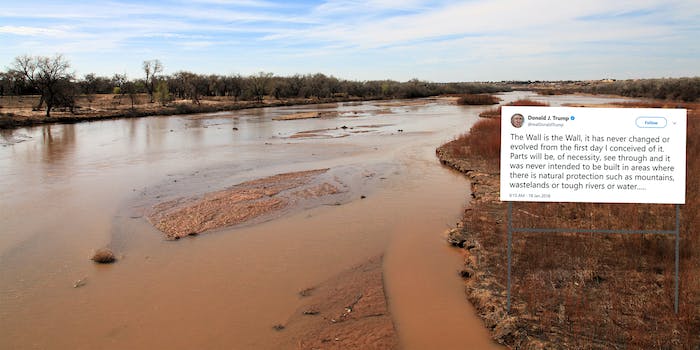 Everyone knows Trump wanted a wall. What this tweet presupposes is... maybe he didn't?

This morning—as the immigration debate has embroiled Washington and put the government on the precipice of shutting down—the president tweeted an ontological treatise on what it means to be a wall.

The Wall is the Wall, it has never changed or evolved from the first day I conceived of it. Parts will be, of necessity, see through and it was never intended to be built in areas where there is natural protection such as mountains, wastelands or tough rivers or water…..

The wall is the wall, the president notes, except where the wall is nature.

Trump’s dive into the nature of being of structures comes after his chief of staff, John Kelly, said on Fox News that Trump has learned and “evolved” on things in his first year as president, saying that candidates sometimes take positions that are not “fully informed” when they run: “He’s very definitely changed his attitudes toward the DACA [Dreamers] issue and even the wall once we briefed him.”

Kelly also spoke about the president’s strident stance that Mexico would pay for the wall.

“In one way or another, it’s possible that we could get the revenue from Mexico but not directly from their government,” Kelly said.

The president sort of concurred with that stance.

….The Wall will be paid for, directly or indirectly, or through longer term reimbursement, by Mexico, which has a ridiculous $71 billion dollar trade surplus with the U.S. The $20 billion dollar Wall is “peanuts” compared to what Mexico makes from the U.S. NAFTA is a bad joke!

The House will vote today on a short-term spending bill to fund the government.