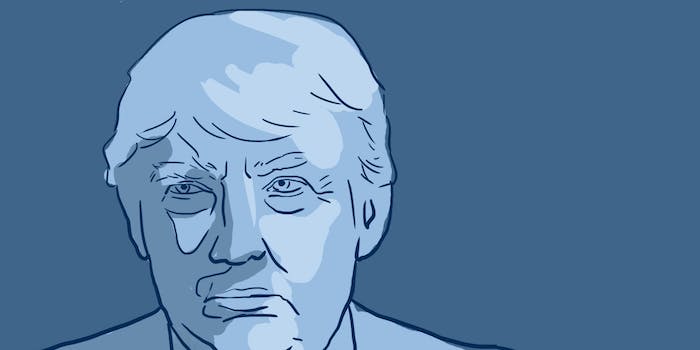 'Maybe he should have been roughed up.'

A Black Lives Matter protester appears to be shoved and kicked by Donald Trump supporters at a rally for the Republican presidential candidate in Birmingham, Alabama, on Saturday, according to a CNN video of the incident.

The protester, Mercutio Southall Jr., told local media that the crowd attacked him after he said Trump was not welcome in Birmingham. “Birmingham is 75 percent black, so why did he choose to come here,” Southall told AL.com. “He could have gone to Mountain Brook or Hoover, I know they have the venues that can handle his rhetoric.”

Southall said he was kicked, punched, and called racial slurs as he was escorted from the venue. From the podium, Trump encouraged his supporters, saying, “Get him the hell out of here.”

Trump went on to reference a Bernie Sanders campaign event during which Black Lives Matter protesters took the mic and held a moment of silence to commemorate the fatal shooting of Michael Brown by police.

Trump stood by his actions and those of his supporters in a Fox & Friends interview on Sunday. “Maybe he should have been roughed up because it was absolutely disgusting what he was doing,” Trump said.

The altercation between Trump’s supporters and Southall is reminiscent of an incident at a Trump rally in Florida last month, in which Trump supporters kicked an immigration activist and dragged him towards the exit of the venue. The incident was also captured on video, this time by NBC.

However, the Trump campaign has taken steps to prevent the media from documenting altercations between the candidate’s supporters and his critics, according to the Washington Post. Since Wednesday, Trump’s campaign manager has insisted that members of the press remain in a designated area rather than mingling with the crowd at events. CNN reporter Jeremy Diamond, who filmed the incident in Birmingham, was noticed by Trump’s staff and forced back into the press area.

From the podium, Trump downplayed the incident. “You know, you have one guy over there shouting. We have thousands of people and you’ll read about him tomorrow,” Trump said.