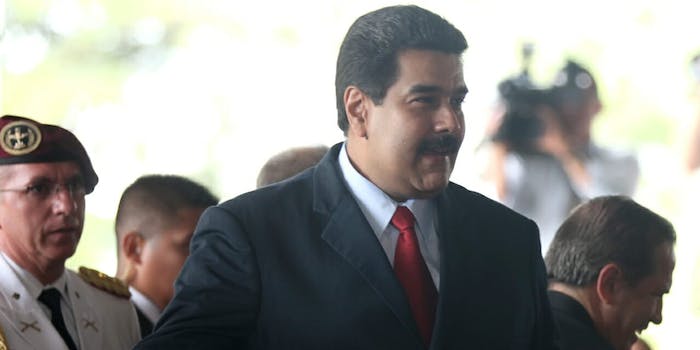 The currency was supposed to subvert U.S. sanctions.

The action explicitly bans “all transactions related to, provision of financing for, and other dealings in” any digital currency from Venezuela in an extension of U.S. sanctions levied against the country.

Venezuelan President Nicolás Maduro announced Petro in December, stating that it would help “overcome the financial blockade” and existed as a way around the Trump administration’s sanctions.

It was hoped that in skirting sanctions, Petro would help revive the South American country’s weakening economy and avert a humanitarian crisis. Inflation of the bolívar fuerte, Venezuela’s official currency, is set to hit 13,000 percent later this year.

Despite producing multiple reports on the cryptocurrency, however, it is still unclear which blockchain technology Petro is based on and Maduro has reserved the right to manipulate its value at any time—making it all incredibly risky. Moreso, he claimed that the currency was backed by crude oil and mineral reserves, but experts are unsure.

“They’re setting up a stand on the front porch of Venezuela to sell snake oil that’s essentially backed by nothing,” Russ Dallen, a managing partner at the investment bank Caracas Capital Markets, told McClatchy last week. “People believe it’s backed by oil, but if you read the contract, it’s really not.”

Trump ratcheted up economic pressure on Venezuela building on sanctions first introduced against Maduro’s government by President Barack Obama in 2015.

Treasury Secretary Steve Mnuchin met with other finance ministers at a G20 conference in Buenos Aires in Argentina to discuss the situation.

“President Maduro decimated the Venezuelan economy and spurred a humanitarian crisis,” he said in a statement. “Instead of correcting course to avoid further catastrophe, the Maduro regime is attempting to circumvent sanctions through the Petro digital currency—a ploy that Venezuela’s democratically elected National Assembly has denounced and Treasury has cautioned U.S. persons to avoid.”