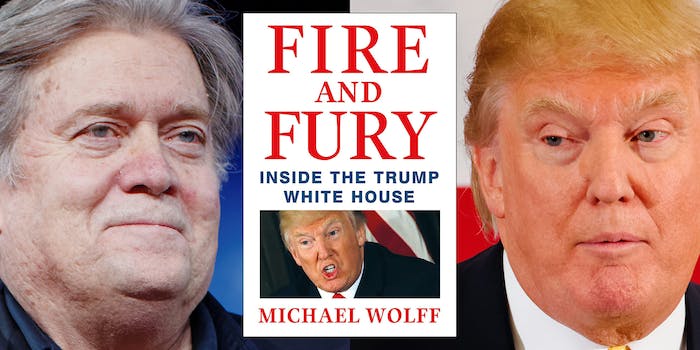 This is getting serious.

Today, two explosive snippets from a new book about President Donald Trump‘s first year in office were released. Now, the right is rushing to discredit it, with even the president launching into the fray.

Wednesday morning, the Guardian, which had reviewed a copy of Michael Wolff’s Fire and Fury, said that Steve Bannon called Donald Trump Jr. “treasonous” for taking a meeting with a Russian lawyer. Bannon reportedly said Special Prosecutor Robert Mueller’s investigation would “crack” the president’s son like an “egg.”

The president issued a fiery statement about his former close advisor.

Steve Bannon has nothing to do with me or my Presidency. When he was fired, he not only lost his job, he lost his mind. Steve was a staffer who worked for me after I had already won the nomination by defeating seventeen candidates, often described as the most talented field ever assembled in the Republican party.

Now that he is on his own, Steve is learning that winning isn’t as easy as I make it look. Steve had very little to do with our historic victory, which was delivered by the forgotten men and women of this country. Yet Steve had everything to do with the loss of a Senate seat in Alabama held for more than thirty years by Republicans.

Thursday afternoon, the Guardian report was followed up by a lengthy excerpt in New York Magazine from the book titled “Donald Trump Didn’t Want to Be President.” In detailing his credentials for writing the book, Wolff said that “he was able to take up ‘something like a semi-permanent seat on a couch in the West Wing’— an idea encouraged by the president himself.”

The excerpt makes several shocking claims about how Trump assumed he would lose, but most people were struck by one particular passage:

Shortly after 8 p.m. on Election Night, when the unexpected trend — Trump might actually win — seemed confirmed, Don Jr. told a friend that his father, or DJT, as he calls him, looked as if he had seen a ghost. Melania was in tears—and not of joy.

There was, in the space of little more than an hour, in Steve Bannon’s not unamused observation, a befuddled Trump morphing into a disbelieving Trump and then into a horrified Trump.

White House Press Secretary Sarah Huckabee Sanders called it a “trashy tabloid fiction,” with sources in the book providing “false and misleading accounts” in a “sad desperate attempts at relevancy.”

Meanwhile, Melania Trump’s own press secretary also issued a statement about the book, denying the account of her crying, saying she was “very happy” her husband won.

The article takes a rush through the whirlwind post-election period, portraying a bewildered team throwing together a slapdash presidential transition team. Of note, according to Wolff, Trump reportedly had no idea who former Speaker of the House John Boehner was.

Ailes, a veteran of the Nixon, Reagan, and Bush 41 administrations, tried to impress on Trump the need to create a White House structure that could serve and protect him. “You need a son of a bitch as your chief of staff,” he told Trump. “And you need a son of a bitch who knows Washington. You’ll want to be your own son of a bitch, but you don’t know Washington.” Ailes had a suggestion: John Boehner, who had stepped down as Speaker of the House only a year earlier.

More lies, go back and look, Boehner and #potus spent time together well before the election. Just another pathetic attempt to smear @realDonaldTrump #fakenews https://t.co/xxuhdiQU8f

With many from inside and outside the White House lashing out at Wolff’s account, it wasn’t long that people began looking into the Wolff’s past, finding an incident where he was accused by a writer at a media watchdog magazine of making up quotes for a book in 1998.

In the story, Noah Robischon, writing for Brill’s Content said that “seven of the main characters and six others portrayed in-or familiar with-events in the book, disagree. They say Wolff invented or changed quotes. And none of those quoted recalls Wolff taking notes or recording the discussions, some of which took place three years ago.”

Michale Wolff book "Burn Rate", Brill's Content criticized Wolff for "apparent factual errors" said that more than a dozen of subjects he mentioned complained that Wolff had "invented or changed quotes" that he attributed to them. He Notoriously Uses Imagination Over Facts!

don't be super fast to plant your flag on Michael Wolff's hill sight unseen until you refresh your mental browser back to his Burn Rate controversies.

@MichaelWolffNYC Great work of tabloid FICTION – Michael Wolff has shown he is very adept at writing all kinds of FICTION (Burn Rate, Murdoch, etc.) – this will not disappoint with name drops and page-turning content. #tcot #MAGA #trump45 pic.twitter.com/BTw9MpFWF4

In a rebuttal to the investigation into his book, Wolff wrote that Brill’s Content was trying to hoist its “own petard” by accusing him of making up stuff in parts of his book that were satirical in nature.