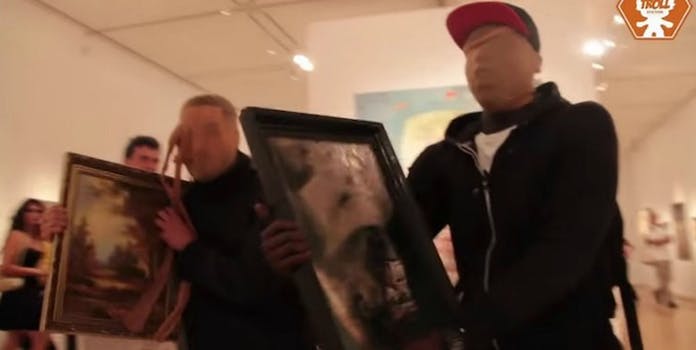 Don't expect Trollstation to stop its trolling ways, though.

Sometimes, trolling can be funny and/or harmless. Sometimes, it provides a public service, and other times, trolls make us think about the world around us in a different way.

But sometimes, trolling will do nothing but put you behind bars.

That’s what four members of the Trollstation YouTube channel learned the hard way Monday when they were sentenced to jail after pleading guilty to two counts of using threatening words or behavior with intent to cause fear, according to the BBC.

You might remember Trollstation from the time they hotboxed the London Eye on 4/20. But the pranks that incarcerated 27-year-old Daniel Jarvis, 23-year-old Helder Gomes, 20-year-old Endrit Ferizolli, and 29-year-old Ebenezer Mensah for 16 to 20 weeks consisted of a fake robbery at the National Portrait Gallery and a kidnapping hoax at the Tate Britain art museum.

In March, another member of Trollstation—which boasts nearly 720,000 YouTube subscribers—was sentenced to jail for 36 weeks for a bomb hoax and for the fake robbery.

“The hoaxes may have seemed harmless to them, but they caused genuine distress to a number of members of the public, who should be able to go about their daily business without being put in fear in this way,” Robert Short of the Crown Prosecution Service told the BBC.

“We hope these convictions send a strong message that unlawful activities such as these will not be tolerated in London.”

Here’s one example of the fake robbery, which included alarms sounding, works of art that previously had been bought by the members (who were wearing pantyhose over their heads and faces), plenty of yelling, a number of panicked patrons, and according to reports, at least one woman who fainted.

Sure, it’s slapstick comedy—the bungling burglars gag usually can’t lose—but it also can be dangerous to the public.

“We have been told that the defendants intended this a joke,” said District Judge Mike Snow, according to Engadget. “Their sense of humor is warped and immature. It’s likely that the members of public who had seen images of people running for their lives in recent terrorist attacks would run in fear. And that’s what happened.”

Later on Monday, other members of Trollstation posted a video in which they said “we might have overstepped the line” but also defended their actions. They said they weren’t even sure anybody had been trampled during the hoax.

It doesn’t exactly sound like Trollstation has learned a lesson.