Want to combine a video with a song with a GIF? You can. Trio just makes sure you give credit where credit is due.

Earlier this year, Grammy nominated DJ Diplo drew the ire of the Internet after artist Rebecca Mock called him out for using a GIF of her creation in a Snapchat video without asking her permission and without crediting her.

It’s a problem that he may have avoided had he been using Trio.

The new media mashup app from Meograph turns its users into DJs of digital content, with social feeds serving as their records and Trio as the turntables. The concept is pretty simple: take assets shared by other people—be they videos, photos, GIFs, music, etc.—and turn them into a mashup, resulting in a new, singular creation made out of many different parts. 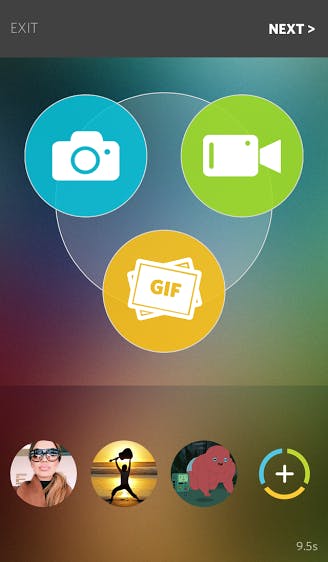 The cumulation of two and a half years of work on building media creation products, Trio is the final form of prior attempts from the Meograph team, which boasts a mashup of qualifications in its own right. Leybovich is described as an “MIT rocket scientist, Berkeley student body president, McKinsey consultant, Guinness Book of World Records finalist,” while his partner Clay Garrett holds titles that include “professional boy band member, Georgia Tech art ­and tech star, undercover gang documentarian, and designer and developer.” The investors are an all-star cast of impressive backers including a former COO of Lucasfilms.

“Most people are not on social media with public profiles just to be wallflowers. And by and large it’s kind of a thrill to be remixed.”

The group behind the app thinks they’ve hit on something unique by allowing users to pull from all sorts of sources to build content.

It’s also not without its hurdles.

“Most of the material you find online is covered by copyright, because copyright applies automatically. That includes most photos on Instagram, videos on YouTube, and so on,” Electronic Frontier Foundation staff attorney Mitch Stoltz explained to the Daily Dot. “For most creative material that’s online, you need permission from the copyright holder for some uses. Other uses are covered by fair use.” When fair use applies, the content becomes free to anyone, no permission required.

Trio is banking on that fair use clause. Leybovich is confident that his app and the content that comes out of it falls “pretty clearly under fair use.” He explained that the clips appearing in Trio remixes are very short, used in a highly derivative manner, and aren’t competing commercially with the original content. That logic is sound according to Stoltz, who explained that “noncommercial uses, transformative uses, using small portions of a work… and the lack of any commercial impact on the original work all move the needle in favor of fair use.”

Still, if the originator of a piece of content would rather not participate in the process, Trio offers some outs. Users can use a “Report this Trio” function, which sends the content to a review process. “Beyond that, we’re thinking about letting content owners directly authenticate and self-serve flag any of their content used,” Leybovich said, though he noted that they had yet to receive any objections to how content has been used. “Most people are not on social media with public profiles just to be wallflowers. And by and large it’s kind of a thrill to be remixed.”One of the major benefits of Trio, whether an artist wants their work repurposed or not, is that they’ll have actual recourse with the app. Trio goes out of its way to cite its sources with the veracity of a college kid afraid of being accused of plagiarism. Every asset used in a Trio production gets attribution, linking back to the person responsible for that particular element of the work.

“As a mashup product, we take attribution very seriously.  We rely on all these sources of content, and want to demonstrably add value from day one,” Leybovich stated. “We do linked attribution to every third-party asset used in Trio: showing who owns the content, where it lives, and providing a link to get there.”

While attribution is a great byproduct of Trio, it may not be enough on its own. “Many people don’t realize this, but it doesn’t matter very much for copyright purposes whether or not the source material for a remix or sample is attributed,” Stoltz said. “Crediting a source probably doesn’t transform an infringing use into a lawful use, and failure to attribute doesn’t rule out a lawful fair use.”

The goal for Trio isn’t just to make sure a person gets proper credit though; Leybovich wants to add additional value to the original product. “If it’s an Instagram or Vine, it’ll drive traffic to those original content owners.  If it’s a song or movie, it’ll take you to get it on iTunes,” he said. It’s a far cry from the current process in which content can just be downloaded and reused, often unbeknownst to the artist until they come across it, like Rebecca Monk did Diplo’s video.

So far, Leybovich’s plan seems to be working. He said in the Trio beta run, 35 percent of users who clicked to learn what song was used in a remix went on to purchase that track—a pretty insane conversion rate, even for a small sample size. It seems unlikely for that number to be sustainable but it certainly lays positive groundwork. Leybovich is even thinking of possibilities further in the future. “Down the road whenever it’s a thing like a sweater, we’ll take you to where to buy it directly.”

On social media, not much is sacred—especially if you haven’t put in the time to lock down privacy settings. Art is a precious thing for creators, something they feel strongly about releasing to the world. Once it’s out there, it becomes as much a part of the eyes that see it as the hands that created it. Every piece of media put out is like a painting in the middle of a white canvas. Trio’s ready to fill the rest in.