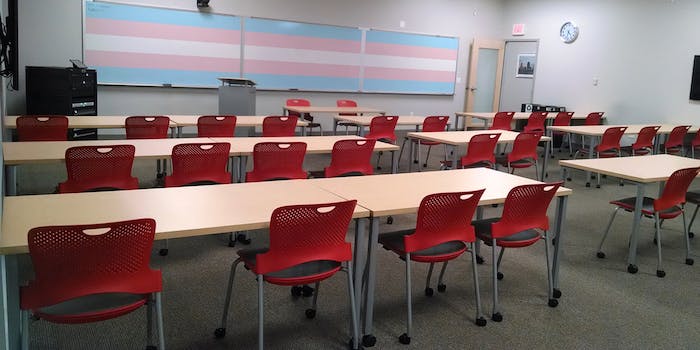 The joint lawsuit alleges that 'sex' doesn't include gender identity.

On Friday morning, 10 U.S. states filed a joint lawsuit in a Nebraska court, challenging the federal government’s policy mandating that transgender students be given equal access to restrooms and locker rooms that correspond to their gender.

Along with Nebraska, the states of Arkansas, Kansas, Michigan, Montana, North Dakota, Ohio, South Carolina, South Dakota, and Wyoming joined in to accuse the Department of Education and the Department of Justice of “rewriting the unambiguous term ‘sex’ under Title IIV and Title IX to include ‘gender identity,'” according to the complaint.

In simple terms, the states don’t want transgender students to use bathrooms that correspond to their gender identity. And they want the federal government to agree with their interpretation of the term “sex” as something that refers solely to “one’s genes and anatomy.”

The Daily Dot reviewed the complaint with Sasha Buchert, a staff attorney at the Transgender Law Center. According to Buchert, the definition of “sex” that includes gender identity dates back to a watershed 1989 Supreme Court case, Price Waterhouse v. Hopkins, brought by a woman who was passed up for promotions at work because her supervisors said she didn’t look and act feminine enough.

“Sex discrimination isn’t about your DNA, it’s the discomfort the discriminator has with the defendant’s gender,” Buchert told the Daily Dot. “It’s right and appropriate for federal agencies to interpret their policies based on court interpretations.”

In May, the Obama administration sent a “Dear Colleague” letter to school districts around the country that clarified the federal policy on equal access to restrooms and other semi-private facilities.

The Departments treat a student’s gender identity as a student’s sex for the purposes of Title IX and its implementing regulations. This means that a school must not treat a transgender student differently than it treats students of the same gender identity.

The language in the letter was clear: School districts must allow transgender students access to facilities that match their gender, or else they would risk federal funding.

Just two weeks later, 11 states filed a lawsuit in Texas slamming the Department of Education and the Department of Justice for the letter; similarly to the Nebraska complaint, the states accused the federal agencies of reinterpreting the definition of “sex” to include gender.

The Texas lawsuit accused the feds of turning “workplaces and educational settings across the country into laboratories for a massive social experiment.”

For Buchert, terms like “social experiment” are especially dangerous when combined with state lawsuits and legislation that is aimed directly at policies affecting vulnerable minors. Buchert said that the Transgender Law Center has battled over 50 anti-trans pieces of legislation that were proposed in 2016 alone. While most of the bills have been defeated, some slipped through—like North Carolina’s controversial H.B. 2, a bill that not only banned transgender residents from equal access to bathrooms but also rolled back existing non-discrimination protections for LGBT people and even blocked cities and towns from raising the minimum wage.

“Ninety percent of these bills are targeting students and youth,” Buchert told the Daily Dot. “Sometimes the bills target employees as well, but the vast majority of the bills target minors. It’s so insidious, because our suicide rates are so high. It sends an awful message to trans youth.”