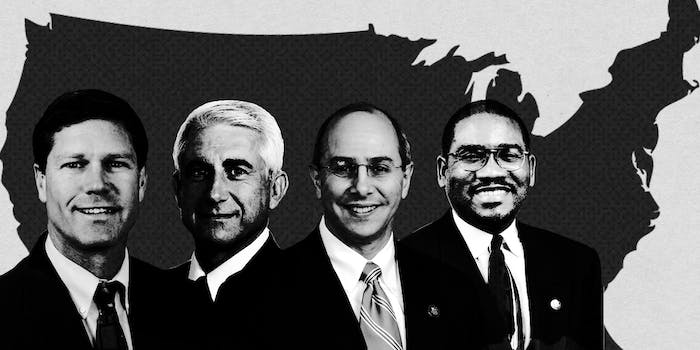 The TPP now has its own congressional caucus

Perhaps the biggest criticism that Internet advocates have against the Trans-Pacific Partnership is that lobbyists get a say in what goes in it but regular folks don’t. And now, they have their own congressional caucus to boot.

The TPP is a massive trade agreement that would standardize trade relations between 12 countries, including the U.S., Australia, Canada, and several in Asia and Latin America. But critics say it’s a way for countries’ trade representatives to create de facto laws, shared among all participating nations. Corporate lobbyists are given the opportunity to weigh in on the TPP’s negotiations, but private citizens and public advocacy groups are excluded from the process.

One advocacy group, the Electronic Frontier Foundation, has consistently raised the alarm that the TPP’s intellectual property chapter could possibly force all participating nations to adopt stricter, more regressive Internet policies. The EFF is also a perfect example of how public advocates have been shut out from the negotiations: In September 2012, two EFF members were allowed to speak with some TPP negotiators. Three months later, when the TPP nations convened in New Zealand, they were locked out of the talks. By March 2013, the EFF didn’t bother sending anyone to the meeting in Singapore; in July, Malaysian police arrested local protesters.

As would be expected, none of the four congressmen’s respective statements addressed common concerns with the TPP. They instead focused on the jobs the American jobs and revenue the TPP will supposedly create.

The TPP is aimed at “providing the tools necessary to protect intellectual property in the digital age,” MPAA chairman Chris Dodd said.

In the meantime, the EFF is trying to fight its own battle in the U.S. Congress against the TPP. On Thursday, it launched a new call to fight against members of the Senate who want to “fast-track” the TPP—meaning that Congress wouldn’t be able to debate the contents of the agreement once negotiations are over, but rather just vote yes or no.