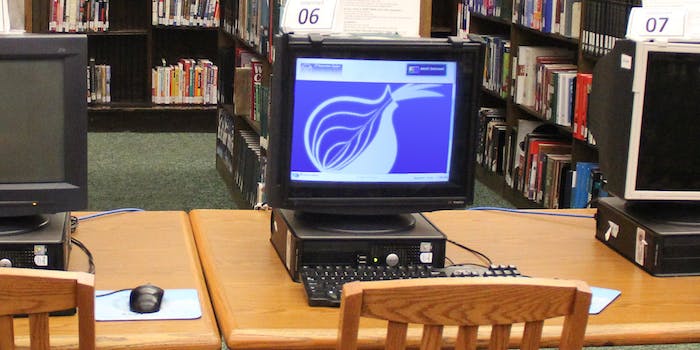 The Obama administration is under pressure to explain how it is treating libraries that connect to the global anonymity network Tor.

Rep. Zoe Lofgren (D-Calif.) on Thursday sent the Department of Homeland Security a letter asking for information about a recent incident that could create a chilling effect on the use of Tor, a popular service for concealing one’s identity on the Internet.

After a Lebanon, New Hampshire, library announced that it planned to become an “exit relay”—a crucial part of the routing system—for Tor’s network, the local police department met with the library and the city government to discuss the plan. Police only discovered the Kilton Public Library’s intentions after an agent at Immigration and Customs Enforcement, a DHS agency, read about it online and passed along word.

Tor works by encrypting a user’s Internet traffic and routing through multiple relays before connecting to websites or online services, thus masking data that could be used to identify the user. The exit relay serves as the final connection, the point at which traffic leaves the Tor network and touches the rest of the Internet.

Under pressure not to facilitate the use of the anonymous service, the library briefly took down its exit relay. It later restored the service, and although the library’s IT director told Ars Technica that the federal government wasn’t involved in its meetings with police, Lofgren wants to know exactly what role DHS did play.

“While the Kilton Public Library’s board ultimately voted to restore their Tor relay,” Lofgren wrote to Homeland Security Secretary Jeh Johnson, “I am no less disturbed by the possibility that DHS employers are pressuring or persuading public and private entities to discontinue or degrade services that protect the privacy and anonymity of U.S. citizens.”

Lofgren noted that Tor was more than a service for concealing illegal activity like buying drugs and hiring hitmen. It also protected journalists, dissidents, and “other privacy concerned individuals” living under repressive regimes. The Defense Advanced Research Projects Agency and the U.S. Naval Research Laboratory contributed research and funding to the network, suggesting that the government considers it a vital tool for nurturing democratic movements.

In her letter, Lofgren asked Johnson whether the pressured applied to the library stemmed from “a DHS policy to persuade public or private entities from offering” exit-relay services.

“If this was the result of an agent acting independently,” she wrote, “what steps is DHS taking to ensure that in the future agents do not interfere with privacy protection services being offered to the public?”

Law-enforcement objections to Tor relate to a broader conflict between government investigators and security and privacy advocates. On another front in that battle, senior law-enforcement officials are battling tech companies over the use of unbreakable encryption.