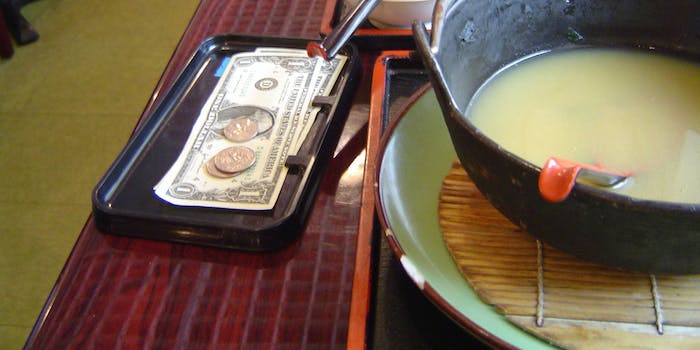 “We're also just strange creative thinkers, and the idea of a sexist tip calculator is SO simple."

In the United States in the 1960’s, women made just 58 cents for every dollar earned by a male counterpart. To address the issue, President John F. Kennedy signed into law the Equal Pay Act, which prohibited gender discrimination in the payment of wages by employers. Since then everything has been perfect and everyone is treated fairly and no one discriminates because it’s illegal.

The Equal Pay Act has had a positive impact on wage discrepancies but according to Census Bureau data, women still make 78 cents on average to every one dollar a man earns—the numbers are even worse for women of color. Efforts to continue to address this problem have routinely been shot down by opposition who claim to support equal pay only to vote against any laws the attempt to narrow the gap.

So what if we just accepted this troubling situation as a fact of life?

Enter Toothpick, a tipping calculator app that suggests a lower tip when your server is a woman. “Women and men were not created equal. So why should they be tipped like they are?” it asks on the app’s site, TipThemLess.org.

The app suggests that users tip women 22 percent less simply because of their gender. Angry? Well, that’s exactly how app creator Gabriel Whaley wants you to feel, and he wants people to take action.

“When issues arise that we feel strongly about, you can count on us taking a stab at doing something about it.”

“The idea came from a number of things. Understanding the stats, being aware of the issue of gender discrimination in the tech scene and in the workplace in general (one of my cofounders at Miscellaneous Mischief happens to be a woman, so we’ve seen her face various obstacles first hand),” he told the Daily Dot. “We’re also just strange creative thinkers, and the idea of a sexist tip calculator is SO simple, and so relevant at the same time.”

Toothpick wants to make the pay gap impossible to ignore by confronting people with the disturbing math of economic inequality. Tip a male server 20 percent on a $50 bill and he gets $10; tip a female and she gets $7.70 after the app applies a “gender reduction.”

Whaley and his team at Miscellaneous Mischief have pulled virtual pranks before, creating a “text in progress” gif to troll iMessage users and building a mile high club hookup app. Toothpick has more of a message. “We’ll always be pranksters” Whaley says, “but when issues arise that we feel strongly about, you can count on us taking a stab at doing something about it.”

Toothpick and TipThemLess.org doesn’t just serve up a constant reminder of the fact that women make less than men; It prompts users to take action to address the wage gap by signing a petition to make the Equal Rights Amendment part of the constitution.

“Everyone seems to get it,” Whaley says of the app. “There has been so much love so far … Our hypothesis was right: This is an effective tool to bring to light the gender wage gap.”