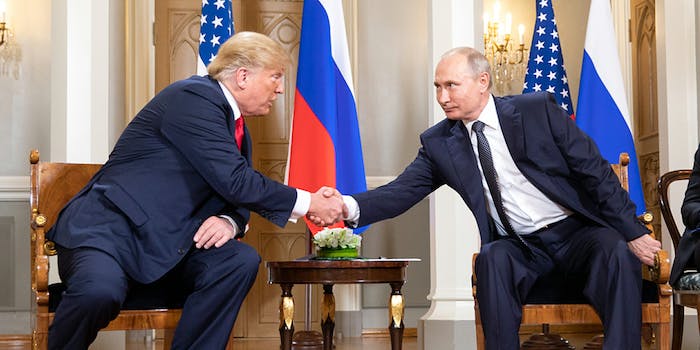 The internet is freaked by it.

Just about every news story this week revolved around President Donald Trump’s press conference in Helskini, Finland with Russian President Vladimir Putin, so it’s only natural Time magazine’s cover this week addressed the conversation around it.

But while everyone is talking about the possible collusion between the Trump campaign and Russia, Time addressed a collision you didn’t know existed.

Trump-Putin face collision, to be precise.

TIME’s new cover: Trump wanted a summit with Putin. He got way more than he bargained for https://t.co/sUu9gGKmmP pic.twitter.com/qq6iOjlis1

Is Putin a shapeshifter who ran as Trump and is now in charge of the American government?? Or is Trump an animorph who has been secretly running Russia this whole time??

Neither did Twitter, which for some reason kept calling this animation haunting and terrifying, despite it … being not.

Unless the shapeshifter thing was true.

You can read the article here, but prepared to be disappointed. A CRTL+F for “shapeshifter” and “animorph” produced zero results.