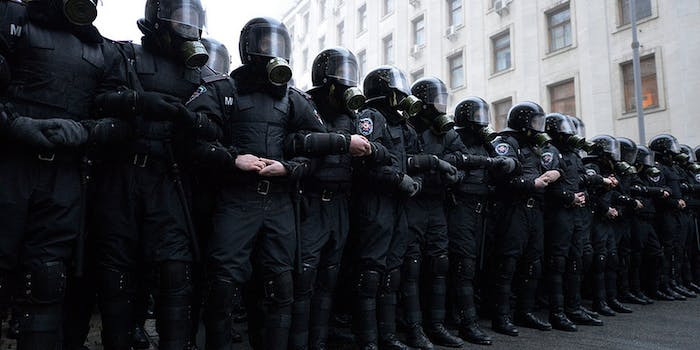 Tiltor incentivizes riot control from within through social media

The cyberpunk dystopia is here.

This is all going to sound a bit cyberpunk dystopia, but there’s now a social media company that allows businesses—and potentially law enforcement services—to incentivize crowd control during riots.

Tiltor is designed to “break up riots from within,” by rewarding those who discourage violent behaviour from inside the crowd itself.

Businesses or police can hire Tiltor to send a message to all the smartphones in a designated area, offering a reward to anyone who attempts to disperse the crowd from within. If the riot ends soon after, everyone who signed up to Tiltor gets a share of the total reward money.

“With everyone in and around a rioting area now incentivized for it to end,” explains Tiltor’s website, “the riot is undermined from within and the tide turns in the authorities’ favor.”

Rather than being a downloadable app, Tiltor is more like a social media go-between that strikes a deal with both rioters and the authorities. In app format, it would be too easy for people to spot Tiltor users in a crowd, meaning that anyone visibly using the app could face retribution.

In an email to the Daily Dot, Tiltor CEO Greg Millington explained that because Tiltor is so new, they are focusing on marketing before testing in live riot conditions. He characterized Tiltor as something police could use to avoid “violent measures,” saying, “By seeding the area with a group reward, the psychology of the rioters can be influenced and perhaps calmed down from the rioting behavior. This prevents injury, damage and saves the police hundreds of hours tied up on regaining order.”

While Tiltor specifies crowd control at music festivals and sporting events rather than political protests (“Protesting is a great way to shine a spotlight on an injustice and not something we will let Tiltor be used against. The problem comes when protests turn to riots.”) its basic concept is one that governments and local authorities would almost certainly be interested in using to break up public protests.

Over the past few years there’s been increased interest in how riots and protests are organized via social media, with the British Ministry of Defence even funding academic research into social media and crowd control (a move that quickly led to a U.K. university being targeted by Anonymous hacktivists).

Tiltor only launched recently and is still looking for investors, but the concept it describes may be the first sign of what many governments are looking for to control social media-centric protest situations.