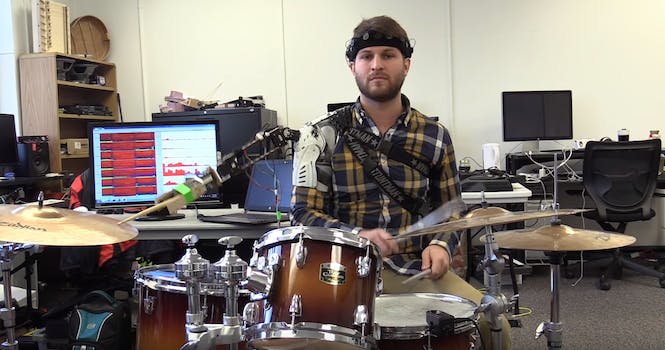 For those about to rock, kill all humans.

After an accident fused a quartet of robotic limbs to his body, nuclear physicist Dr. Otto Octavius devoted himself to a life of crime and fighting Spider-Man. However, villainy isn’t the only option for people either blessed or cured with extra mechanical appendages—they can also choose to rock.

Researchers at Georgia Tech’s Center for Music Technology have created a robotic arm that attaches to a drummer’s body and improvises drum parts based on what the human drummer is playing.

Gil Weinberg, the director of the Center for Music Technology, says in a video about the project that music is an ideal challenge for researchers working in the area of integrating robotic limbs into human movement. “Music is something that is very timely,” said Weinberg, who also led the project. “You really need to do things on the right millisecond. It’s also very spacial. You need to go to the right places. So what better medium to try the concept of a third arm that would augment you and allow to do things that you couldn’t before than music?”

Weinberg added that, since the arm actively pays attention to what the rest of the drummer’s body is doing, it feels relatively natural. When the drummer speeds up the tempo, the arm adjusts accordingly. When the drummer slows down, so does the arm. “The idea is that machines are not separate from humans, but are becoming part of humans,” he said.

The team is looking at other applications for its research outside of the musical sphere. “Imagine if doctors could use a third arm to bring them tools, supplies, or even participate in surgeries. Technicians could use an extra hand to help with repairs and experiments,” Weinberg said in a statement.

In 2014, Weinberg developed a robot arm for Jason Barnes, a drummer who lost a portion of his right arm. Weinberg built a device that Barnes could affix on his arm that would move the drumstick based on sensors attached to his bicep muscles. “Jason can pull the robotic stick away from the drum when he wants to be fully in control,” Weinberg said in a statement at the time. “Or he can allow it to play on its own and be surprised and inspired by his own arm responding to his drumming.”